A Scheduled Monument in Legsby, Lincolnshire 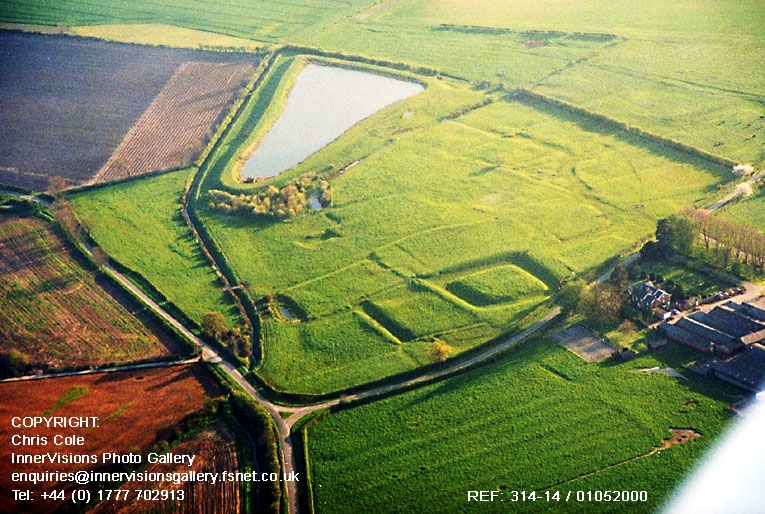 The monument includes the buried and earthwork remains of Bleasby medieval
village, in two separate areas of protection to the north and south of Bleasby
House. The settlement was established before the late 11th century, when the
Domesday Book records two manors at Bleasby and a population of ten. By the
late 13th century the Bleasby family, who were named after the village, held
both of the manors, and by the mid-14th century were also tenants of monastic
holdings there. By 1563 the population of the village had declined to only
seven households. The Bleasby family continued until the end of the 16th
century, although the manor house remained in use until the mid-17th century.
In 1846 there were only three dwellings in the village, forming part of a farm
located to the south west of the medieval manor; these were finally abandoned
in about 1850 when the present Bleasby House was built out to the north of the
manor.
The medieval village was laid out along a low ridge which runs roughly
north-south. At the highest part of the site, approximately 70m south east of
Bleasby House, is a moated enclosure approximately 34m square. In the
northern part of the enclosure are earth-covered building remains standing to
a height of about 0.4m, representing a brick or stone building believed to be
the manor house belonging to the Bleasby family. The moat, which is up to 2m
deep, is crossed on the northern side by a causeway which is thought to
represent the original access to the island. The southern and eastern arms of
the moat are retained by an external bank, and an outlet channel runs downhill
from the south eastern corner of the moat towards two ponds, both roughly
rectangular, on the eastern slope of the stream. The southern arm of the moat
overlies an earlier hollow way which is still visible to the east and west of
the moated site, indicating that the moated manor was established over earlier
settlement remains, probably in the 13th or 14th century. A raised
rectangular enclosure on the south side of the moated site also formed part of
the manorial complex; it is crossed by a later hollow way representing the
course of a post-medieval road. Further ditched enclosures associated with
the manor site extend south and east towards the stream.
Adjacent to the south west of the manorial complex is a further series of
raised enclosures, including earth-covered building remains, representing a
post-medieval farm complex which remained in use until the mid-19th century.
Documentary sources indicate that this farm included a house and garden, two
cottages, outbuildings and closes. Adjacent to both the medieval manorial
complex and the post-medieval farm, where the ground slopes gently to the
west, are a series of house plots including the remains of buildings and
yards. Further raised enclosures are located in the western part of the
monument where they partly overlie the remains of earlier ridge and furrow
cultivation. The hollow way which extends roughly east-west between these
enclosures represents a medieval road which remained in use until the early
19th century.
To the north of Bleasby House is a further area of earthworks, including a
series of enclosures aligned along a north-south hollow way which would
formerly have linked with hollow ways in the southern part of the village. The
northern part of the settlement may have originated as the focus of the second
manor recorded in the Domesday Book, perhaps being replanned when the later
manorial complex was established over the south eastern part of the village.
Extending both east and west from these settlement enclosures are the remains
of ridge and furrow cultivation, representing parts of two furlongs, the only
surviving parts of a once extensive system of open fields which formerly
surrounded the village.
All fences and gates are excluded from the scheduling, although the ground
beneath them is included.

Medieval villages were organised agricultural communities, sited at the centre
of a parish or township, that shared resources such as arable land, meadow and
woodland. Village plans varied enormously, but when they survive as
earthworks their most distinguishing features include roads and minor tracks,
platforms on which stood houses and other buildings such as barns, enclosed
crofts and small enclosed paddocks. As part of the manorial system, most
villages included one or more manorial centres which may also survive as
visible remains as well as below ground deposits. Villages were the most
distinctive aspect of medieval life in central England and their
archaeological remains are one of the most important sources of understanding
about rural life in the five or more centuries following the Norman Conquest.
Medieval settlements were supported by a communal system of agriculture based
on large, unenclosed open arable fields. These large fields were subdivided
into strips (known as lands) which were allocated to individual tenants. The
cultivation of these strips with heavy ploughs pulled by oxen-teams produced
long, wide ridges, and the resultant 'ridge-and-furrow' where it survives is
the most obvious physical indication of the open field system. Individual
strips or lands were laid out in groups known as furlongs, which were in turn
grouped into large open fields. Well-preserved ridge-and-furrow, especially
in its original context adjacent to settlement earthworks, is both an
important source of information about medieval agrarian life and a distinctive
contribution to the character of the historic landscape.
The medieval village of Bleasby, and the remains of its open field system,
survive well as a series of substantial earthworks. As a result of detailed
archaeological survey and historical research they are quite well understood.
The remains of house plots and enclosures, including those of the moated
manor, will preserve structural and artefactual evidence for domestic and
economic activities on the site, giving an insight into the lifestyle of the
inhabitants. Waterlogging in parts of the site will also preserve organic
material such as wood and leather, together with environmental remains which
will provide information about the nature of the landscape in which the
village was set. The association of the village remains with those of its
open fields will also preserve evidence for the economy of the settlement and
its place in the wider medieval landscape.