A Scheduled Monument in Buslingthorpe, Lincolnshire 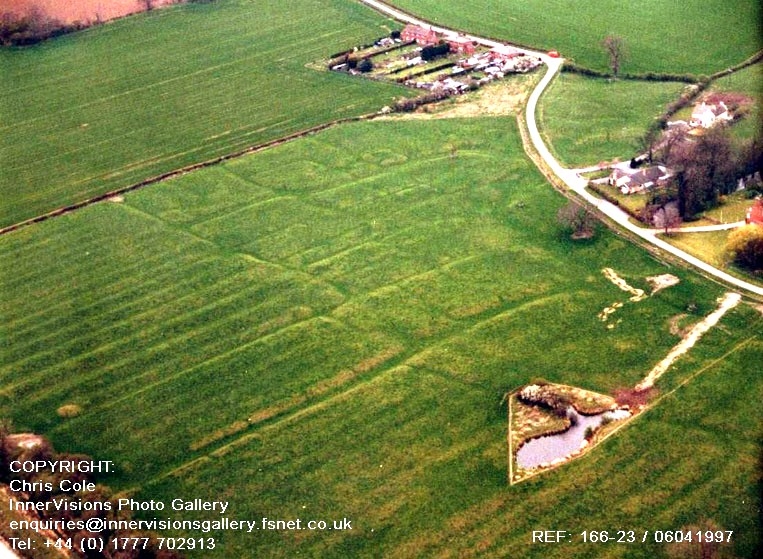 The monument includes the earthwork and buried remains of the medieval
village of Buslingthorpe and associated features. The village, centred upon
the moated manor site still occupied by Manor Farm, was first recorded in the
late 11th century under the name Esethorp. From the early 12th century the
manor was tenanted and then held by the family of Buselinus, and by the later
13th century their name had become combined with that of the village. The
settlement and manor site are believed to have been remodelled during this
period. At the end of the 14th century the Buslingthorpe family ceased, and
during the 15th and 16th centuries the manor was held by the Tyrwhitts, who
gradually turned the land over to sheep-rearing and moved elsewhere. By the
beginning of the 17th century the village was largely depopulated and the
church ruinous. During the 19th century the present farmhouse was built on
the site of the earlier manor and the church partly rebuilt. Manor Farm,
which is Listed Grade II, and the church, which is Listed Grade II*, are
excluded from the scheduling although the ground beneath them is included.

The remains of the medieval village take the form of a series of substantial
earthworks extending to both sides of the modern road. The core of the
settlement is a subrectangular area, delineated by the remains of hollow ways,
across the southern part of which the present road passes. At the centre of
this area, on the north side of the road, are the remains of a medieval moated
site now partly occupied by Manor Farm. The moated island on which the present
farmhouse stands is a rectangular raised platform where the buried remains of
the medieval manor house and associated structures are located. The island is
surrounded by a wide moat, still water-filled except on the south and south
east where it has been partly infilled and occupied by garden and modern farm
buildings. Adjacent to the north east of the moated site is the surviving part
of another, smaller, moated enclosure, thought to be contemporary with the
main moated site and perhaps originating as a manorial garden or yard area.
The manorial complex formerly included further enclosures to the east, now
levelled by ploughing. Adjacent to the west of the moated site, still within
the manorial centre of the village, is the Church of St Michael. The present
building, which is in the care of the Churches Conservation Trust, overlies
the buried remains of an earlier church.

Running north east to south west along the northern edge of the moated site is
one of the hollow ways which delineate the central manorial complex; another
runs roughly north south beneath the modern road to the west of the church,
whilst a further hollow way runs east-west on the south side of the modern
road. The earthwork remains of the village house plots and other hollow ways
extend outward from each of these. The house plots are represented by ditched
enclosures, which include the buried remains of dwellings and yards.
Extending down the slope in the southern part of the monument is a complete
furlong of ridge and furrow cultivation, once part of the medieval open fields
which formerly surrounded the settlement. The ridges terminate at the stream
at the bottom of the slope where the substantial earthwork remains of a large
embanked pond are located. The earthworks, lying in the course of the west-
flowing stream, include a large `L'-shaped dam forming the west and south
sides of the pond; an overflow channel runs around the outside of the dam.
This pond is believed to have retained water for a mill formerly standing at
the north west end of the dam. Adjacent to the south of the pond, at the
bottom of the upward slope, are the heads of another group of ridges
representing the end of another furlong of ridge and furrow. The cultivation
remains within the monument represent the only surviving parts of a once
extensive system of open fields contemporary with the medieval village.

All standing buildings, fences and gates are excluded from the scheduling
although the ground beneath them is included.

Medieval rural settlements in England were marked by great regional diversity
in form, size and type, and the protection of their archaeological remains
needs to take these differences into account. To do this, England has been
divided into three broad Provinces on the basis of each area's distinctive
mixture of nucleated and dispersed settlements. These can be further divided
into sub-Provinces and local regions, possessing characteristics which have
gradually evolved during the last 1500 years or more.
This monument lies in the Lincolnshire Scarp and Vale sub-Province of the
Central Province, which comprises a succession of scarps and vales in which
clay vales with alluvial deposits and a chalk ridge, together with associated
glacial deposits, form the structural framework of the landscape. There is a
very dense scatter of nucleated settlements, many of which are situated in
lines along favoured scarp-foot and dip-slope locations. Large numbers of
medieval village sites now lie wholly or partially deserted. Densities of
dispersed farmsteads are very low.
The Scarp and Vale Country local region is divided by the Lincoln Edge from
the broad Vale of Trent to the west. Chains of ancient village settlements,
some now deserted, are characteristic of the region. They occur where soils
change and springs appear. Densities of dispersed farmsteads are uniformly
low.

Medieval villages were organised agricultural communities, sited at the centre
of a parish or township, that shared resources such as arable land, Meadow and
woodland. Village plans varied enormously, but when they survive as earthworks
their most distinguishing features include roads and minor tracks, platforms
on which stood houses and other buildings such as barns, enclosed crofts and
paddocks. They frequently included the parish church within their boundaries,
and as part of the manorial system most villages included one or more manorial
centres which may also survive as visible remains as well as below ground
deposits. Villages were the most distinctive aspect of medieval life in
central England and their archaeological remains are one of the most important
sources of understanding about rural life in the five or more centuries
following the Norman Conquest.

Medieval settlements were supported by a communal system of agriculture based
on large, unenclosed open arable fields. These large fields were subdivided
into strips (known as lands) which were allocated to individual tenants. The
cultivation of these strips with heavy ploughs pulled by oxen-teams produced
long, wide ridges, and the resultant ridge and furrow where it survives is
the most obvious physical indication of the open field system. Individual
strips or lands were laid out in groups known as furlongs, which were in turn
grouped into large open fields. Well preserved ridge and furrow, especially
in its original context adjacent to settlement earthworks, is both an
important source of information about medieval agrarian life and a distinctive
contribution to the character of the historic landscape.

The medieval village of Buslingthorpe, and the remains of its open field
system, survive well as a series of substantial earthworks. As a result of
detailed archaeological survey and historical research they are quite well
understood. The remains of house plots and hollow ways will preserve valuable
evidence for domestic and economic activities on the site, giving an insight
into the lifestyle of the inhabitants. The manorial moated site and churchyard
at the centre of the settlement survive largely intact, and the buried remains
of medieval buildings here will demonstrate how these components functioned as
vital parts of the local and regional community. The association of the
village remains with those of its open fields and watermill will also preserve
evidence for the economy of the village and its place in the wider medieval
landscape.