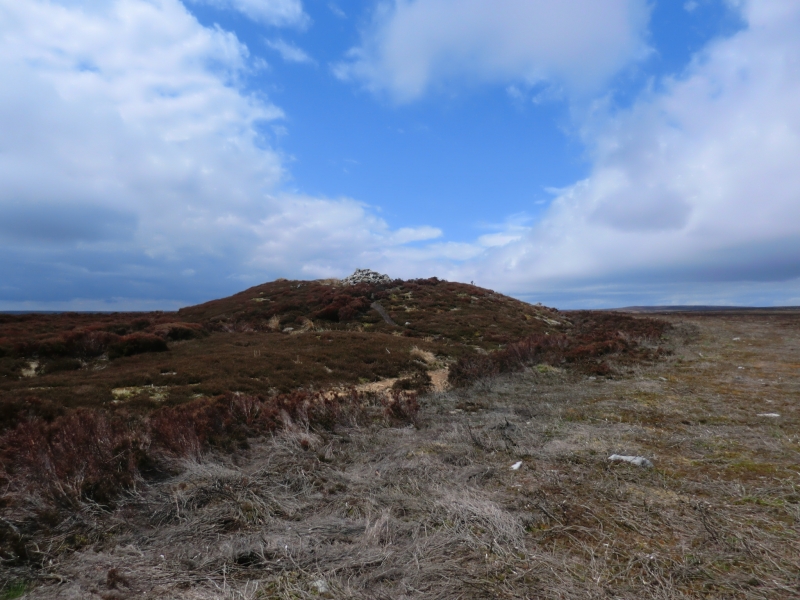 The monument includes the buried and earthwork remains of a prehistoric burial
mound which was later used to mark the junction between four parishes:
Glaisdale, Egton , Rosedale East Side and Hartoft. Shunner Howe, which means
`look-out hill' in Old Norse, is sited at the top of a hill which forms the
south eastern spur of Glaisdale High Moor.
Shunner Howe survives as a 25m diameter mound of earth and stone standing up
to 2.5m high. It has a shallow 7m diameter central depression which is
considered to be the result of an excavation, probably by James Rutter in the
early 1850s. At the centre of this depression there is a small modern cairn of
stones which marks the footpath that skirts the north side of the barrow.
Around the southern side of the mound there is a 4m wide ditch with a 3m wide
external bank which are both included in the scheduling.

Shunner Howe is an important and well preserved example of a prominently
sited large barrow. Excavations of round barrows in the region have shown
that they demonstrate a very wide range of burial rites from simple scatters
of cremated material to coffin inhumations and cremations contained in urns,
typically dating to the Bronze Age. A common factor is that barrows were
normally used for more than one burial and that the primary burial was
frequently on or below the original ground surface, often with secondary
burials located within the body of the mound. Modern excavations of barrows
that were opened by 19th century antiquarians have shown that secondary and
even primary burials frequently survive undisturbed. Most barrows include a
small number of grave goods. These are often small pottery food vessels, but
stone, bone, jet and bronze items have also occasionally been found. Shallow
ditches and/or stone kerbs immediately encircling the mounds are also quite
common.