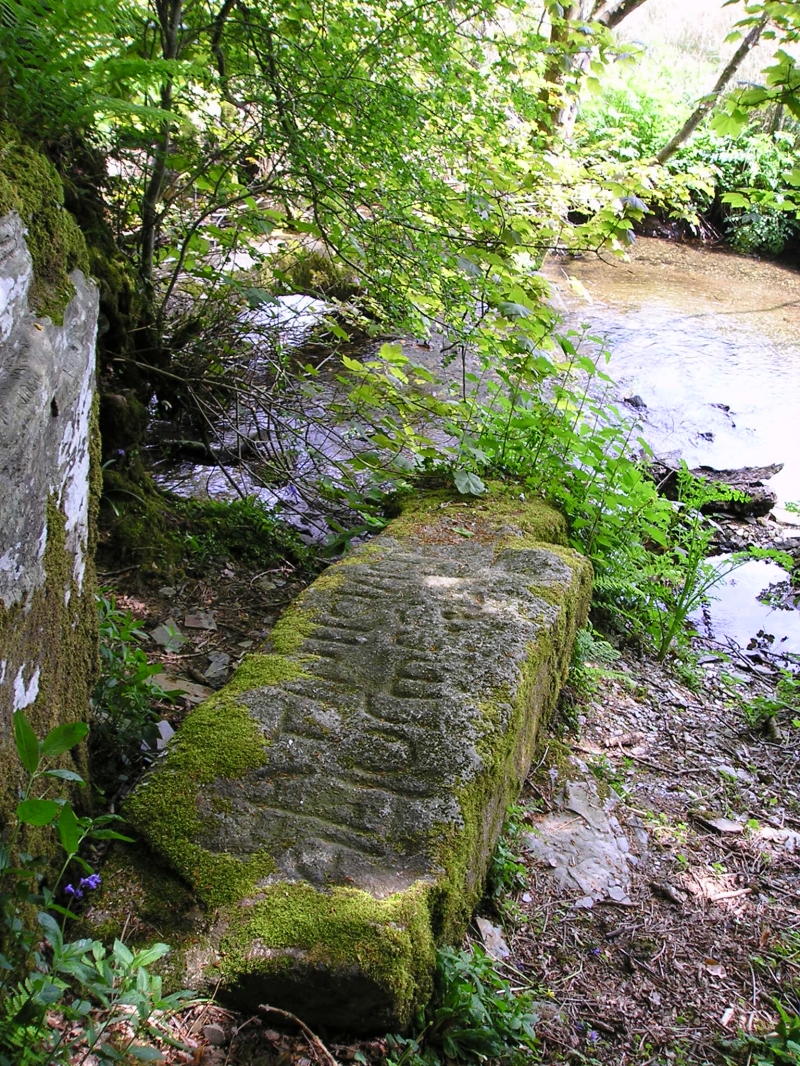 The monument includes an early Christian memorial stone, known as King
Arthur's Tomb, situated on the west bank of the River Camel to the north of
Slaughterbridge.
The early Christian memorial stone survives as a granite shaft lying on the
ground with the inscription facing upwards. The memorial stone measures 2.91m
long by 0.67m wide and is 0.36m thick. The inscription, which is incised
deeply into the stone and is clearly visible, is in Latin, incised in an early
medieval insular form of script derived from Roman style capitals. The
inscription is incised in two lines and has been read as `LATINI IC IACIT
FILIUS MA RI' which translates as `the stone of Latinus here lies the son of
Ma' or `the body of Latinus lies here, son of Ma'. There is another
inscription on the north side of this stone incised in an early medieval
script of Irish origin called `ogham', which occurs on Christian monuments of
the fifth and sixth centuries AD. The ogham inscription, whose lettering is
represented entirely by short incised lines in varying multiples and at
various angles, has been read as `NI', it is very worn and incomplete.
The use of inscriptions in both Latin and ogham, and the formula employed in
the Latin inscription and the style of the lettering combine to suggest a
fifth/sixth century to eighth century date.
This memorial stone was first recorded in 1602 by the historian Carew as
bearing Arthur's name. It was again mentioned in the 18th century as having
been used as a footbridge at Worthyvale. It was removed from being a
footbridge around 1754 and placed in its present location as a garden feature.
The ogham inscription was first recorded in 1875.

The early Christian memorial stone 380m south east of Worthyvale Manor has
survived well with its inscription complete. It is one of only six memorial
stones in south west England to bear an inscription not only in Latin but also
in ogham script. The inscription itself is of importance from a period
generally lacking in such historical references.