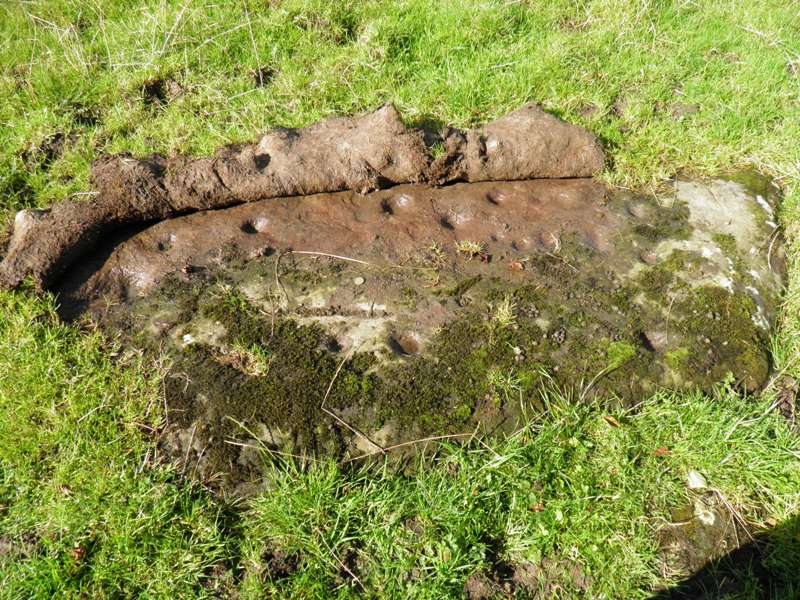 The monument includes a prehistoric carved rock in West Pasture, 385m south
west of The Rigg. It is situated 40m west of the south east corner of the
field and 6m north of the fieldwall. An accurate National Grid Reference is
NZ 00511 16447.
The rock is partly covered by grassy turf. The visible part measures 1.8m by
0.7m by 0.1m high. The carving consists of many cups and two long grooves,
mostly hidden by the turf. More than thirty cups were observed when the turf
was rolled back.

Prehistoric rock art is found on natural rock outcrops in many areas of upland
Britain. It is especially common in the north of England in Northumberland,
Durham and North and West Yorkshire. The most common form of decoration is the
`cup and ring' marking where expanses of small cup-like hollows are pecked
into the surface of the rock. These cups may be surrounded by one or more
`rings'. Single pecked lines extending from the cup through the `rings' may
also exist, providing the design with a `tail'. Pecked lines or grooves can
also exist in isolation from cup and ring decoration. Other shapes and
patterns also occur, but are less frequent. Carvings may occur singly, in
small groups, or may cover extensive areas of rock surface. They date to the
Late Neolithic and Bronze Age periods (2800-c.500 BC) and provide one of our
most important insights into prehistoric `art'. The exact meaning of the
designs remains unknown, but they may be interpreted as sacred or religious
symbols.
Frequently they are found close to contemporary burial monuments and the
symbols are also found on portable stones placed directly next to burials or
incorporated in burial mounds. Around 800 examples of prehistoric rock-art
have been recorded in England. This is unlikely to be a realistic reflection
of the number carved in prehistory. Many will have been overgrown or destroyed
in activities such as quarrying. All positively identified prehistoric rock
art sites exhibiting a significant group of designs will normally be
identified as nationally important.

The carving on the rock 385m south west of The Rigg survives well and it is
one of several carved rocks on a low ridge north of Deepdale. It will
contribute to the study of prehistoric carved rocks in Britain.