A Scheduled Monument in Highworth, Swindon 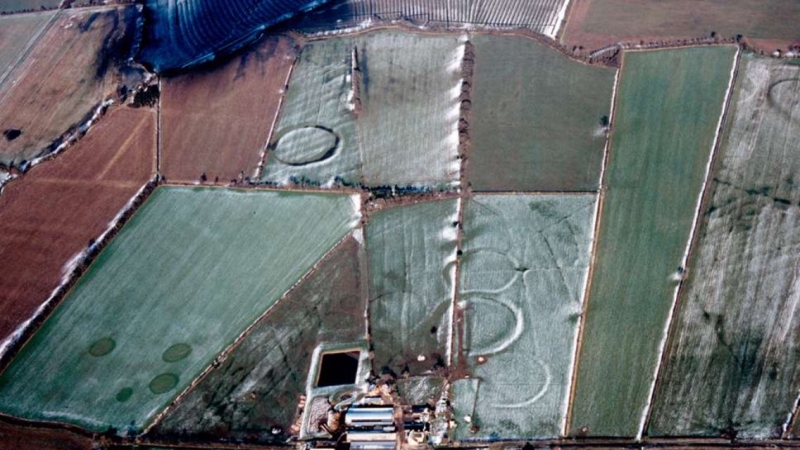 The monument includes three enclosures, known as Highworth circles, located
600m east of North Leaze Farm. The site lies on a clay plain below the slopes
of Little Crouch Hill to the south west. Two of the enclosures are aligned
north to south with a third enclosure located just to the west. All three
enclosures are approximately circular and survive partly as low earthworks
which include a ditch surrounded by an outer bank. The remainder of the
enclosure circuits are visible on aerial photographs and allow overall
diameters of 78m, 80m and 96m respectively for the northern, central and
southernmost enclosures to be calculated.
All fence posts are excluded from the scheduling, although the ground beneath
these features is included.

Highworth circles are a type of earthwork enclosure found mostly in north east
Wiltshire, with a few outliers north of the Thames in Oxfordshire. Although
they are known as `circles' their form varies from circular or sub-circular,
with diameters of between 40m and 90m, to sub-rectangular. All have a wide
flat bottomed ditch with an external bank. Despite limited fieldwork and
excavation their date remains uncertain. Although sharing characteristics with
henge monuments of Neolithic date, Highworth circles, located almost entirely
within the Hundred of Highworth, may be suggested as being of medieval date,
possibly constructed for stock management. Over 40 examples have been
recorded, many of them reduced by modern cultivation.
All examples exhibiting significant survival of archaeological remains will
normally be identified as nationally important.
Despite being partly levelled by cultivation, the three Highworth circles
600m east of North Leaze Farm will contain archaeological remains and
environmental evidence relating to the monument and the landscape in which it
was constructed.