A Scheduled Monument in Chagford, Devon 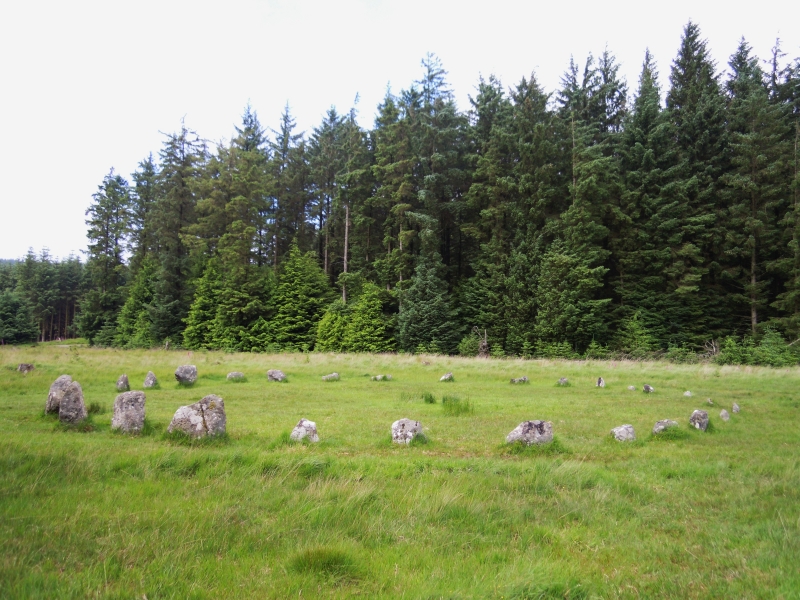 The monument, which falls into two areas, includes a stone circle, three stone
alignments and five cairns situated on a gentle east facing slope overlooking
the valley of the South Teign River. The stone circle, known as Fernworthy
Circle,includes 27 stones, standing up to 1.1m high, forming a 20m diameter
circle. Excavation by the Dartmoor Exploration Committee revealed that the
original ground surface was covered by a layer of wood charcoal. Two stone
alignments lie to the south of the stone circle. The western of these includes
two parallel rows of stones measuring up to 31m long and terminating in a
small ring cairn. The eastern alignment is also of double row type, measures
20.5m long and its upper end is denoted by a small cairn containing a cist.
Excavation of this cairn led to the recovery of large quantities of burnt bone
and wood charcoal. South of this row and possibly originally forming its other
end is another cairn from which a flint chip was recovered.
The third alignment lies north of the stone circle and survives as a
double line of stones extending towards a small cairn. The southern part of
the row includes at least 49 small stones protruding through the turf,
although within the northern half many survive as buried features.
The final cairn within the monument lies south east of the stone circle
and survives as a 6.4m diameter and 0.6m high mound surrounded by a 1.5m wide
and 0.1m high bank which lies 3m from the base of the mound.

Dartmoor is the largest expanse of open moorland in southern Britain and,
because of exceptional conditions of preservation, it is also one of the most
complete examples of an upland relict landscape in the whole country. The
great wealth and diversity of archaeological remains provide direct evidence
for human exploitation of the Moor from the early prehistoric period onwards.
The well-preserved and often visible relationship between settlement sites,
major land boundaries, trackways, ceremonial and funerary monuments as well as
later industrial remains, gives significant insights into successive changes
in the pattern of land use through time. Stone alignments or stone rows
consist of upright stones set in single file or in avenues of two or more
parallel lines, up to several hundred metres in length. They are often
physically linked to burial monuments, such as small cairns, cists and
barrows, and are considered to have had an important ceremonial function. The
Dartmoor alignments mostly date from the Late Neolithic period (c.2400-2000
BC). Some eighty examples, most of them on the outer Moor, provide over half
the recorded national population. Due to their comparative rarity and
longevity as a monument type, all surviving examples are considered nationally
important, unless very badly damaged.

Together the stone alignments, stone circle and cairns 425m and 525m north
west of Sandeman Bridge represent one of the most complete prehistoric ritual
complexes on Dartmoor, with excavation at the stone circle providing evidence
for its use. Despite afforestation the monument survives well and will contain
further archaeological and environmental information relating to the monument
and the landscape in which it was constructed.