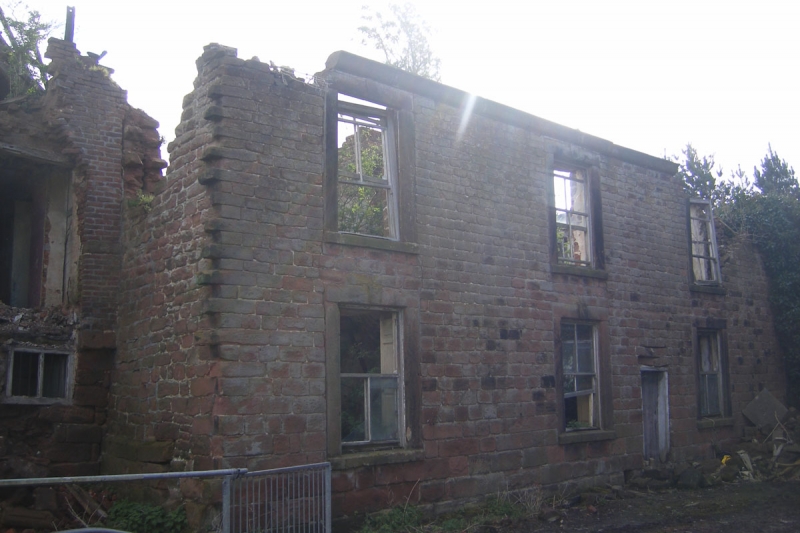 The monument is the moated site of Rainhill Hall, to the south-east of which
lies an extensive system of fishponds and connecting channels. It is divided
into two areas.
The site includes a slightly raised island that was originally surrounded by a
waterlogged moat. Standing on the island are the 16th/early 17th century
north and west wings of Rainhill Hall, which contain much earlier work
including one of the finest late medieval roofs in the county. The moat has
been partially infilled but still survives in a waterlogged state up to 10m
wide and 2m deep on part of the south and much of the east sides where it is
largely sandstone lined. A short distance to the south-east of the moated
site, in woodland known as The Rough, is an extensive complex of 12 largely
waterlogged and inter-connected fishponds.
Rainhill Hall was owned by the Lancaster family for 500 years. The earliest
documentary reference to a house on the site was in 1323 when Henry de Par was
arrested for breaking into the original hall and stealing goods. By the early
17th century the hall buildings were arranged around a courtyard, with a
gatehouse entrance on one side, and a range of 16th century timber farm
buildings on low stone walls situated north-east of the hall. A small
isolated building is also known to have existed south of the hall and close to
the edge of the moat during the early 19th century. Since 1805 the hall has
passed through the Fleetwood, Beaumont and Stapleton-Bretherton families.
Old Hall Farmhouse is a Listed Building Grade II*.
The Old Hall Farmhouse, the modern house on the site, the farmyard and all
tarmacked and paved areas, all service pipes, outbuildings, walls, fences,
paths, access drives and tracks are excluded from the scheduling, although the
ground beneath all these features is included.

Despite infilling of part of the moat and construction of a modern house on
the island, Rainhill Hall Farm moated site retains the north and west wings of
Rainhill Hall and will retain evidence of the other original buildings that
occupied the island, including the remains of the demolished 16th/early 17th
century south and east wings of the hall that were arranged around a
courtyard. Evidence of the gatehouse and other buildings known to have
occupied the island at that date will also survive. Additionally the site
is complemented by an unusually extensive, well preserved and complex system
of fishponds and connecting channels that, together with the waterlogged moat,
will preserve organic material.