A Scheduled Monument in Saddleworth, Oldham 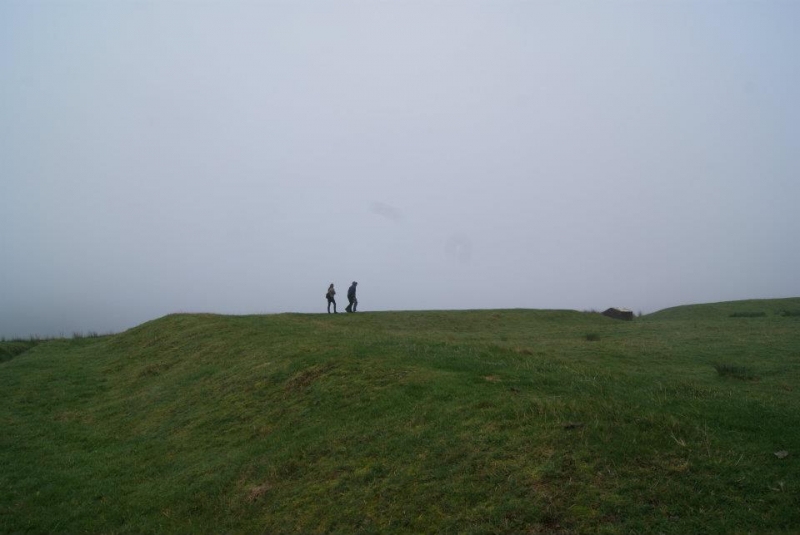 The monument includes a sequence of Roman forts at Castle Shaw, together with
the remains of a settlement outside the ramparts of the forts and a section of
Roman road leading to the forts from the south west. The forts and the remains
of a civilian settlement have been extensively excavated over the last 100
years.
The first fort on the site was an Agricolan period fort, built in turf and
timber c.AD 79. This was refurbished soon after construction and then
abandoned c.AD 95. Within the south eastern half of the fort a fortlet was
constructed, also in turf and timber, c.AD 105. This was redeveloped during
its brief occupation and then sleighted and abandoned c.AD 125. Both military
sites were constructed on a spur of higher ground, known as Castle Hill,
overlooking the Castleshaw Valley. Through the valley runs the Roman road from
Chester to York and the forts were built to defend and patrol the road in this
section as it approaches the western Pennines.
The original fort had two ditches outside a rampart enclosing an area 115m by
100m orientated north east to south west. Within this enclosure were the
`principia' (the administrative centre), the `praetorium' (the officer's
quarters), barracks and granaries. The fortlet, although on the site of the
original fort, had two ditches and a rampart of its own and enclosed an area
50m by 40m with barracks, workshops and a large granary. The south east side
of these defences has been cut off by a later medieval trackway called
Drycroft Lane which runs in a cutting for 150m along that side of the forts
and then heads south west towards Castle Hill Cote.
Outside the ramparts on the south east side of the fortlet are the buried
remains of a settlement which date to the period of the occupation of the
fortlet c.AD 100. This occupies an area 90m long on the edge of the hill
shoulder. These remains were discovered by trial excavation in 1995 and show
that there was a possible `vicus' or civilian settlement which had grown up
with the occupation of the fortlet. Extra-mural settlement of this kind is
likely to have included a bath house. This is expected to have lain to the
south of the forts on the bank of the stream known as Waters Clough. There
have been a number of excavations of this site to establish the nature of the
internal buildings of the fort and the fortlet and the sequence of building
and abandonment. Excavations published in 1908 and 1911 and interpreted by
I.A. Richmond in 1925 have provided information about the sequence of
buildings and their dates. Further excavations from 1957 to 1964 have defined
the position and function of many of the buildings in the interior. The fort
and fortlet were extensively re-excavated from 1984 to 1988 and a programme of
restoration of the fort remains was completed in 1989. Further exploration of
areas outside the forts was carried out during 1995 and 1996. In spite of all
the archaeological activity on the site there will be important and
significant remains of the Roman military settlement left undisturbed.
Earthwork remains of the Roman road leading towards the fort survive 50m to
the south east of Castle Hill. A trackway with a shallow bank on
either side can be traced for 120m before being lost in the ploughsoil of the
field to the south of the forts. This was part of the road from Chester to
York and another section is visible running north east from Castle Shaw Farm.
The relationship to the forts is not yet clear, but there will be evidence
preserved below ground.
The remains of a textile mill which was powered by the stream which ran
through Waters Clough survive 200m to the south of the forts. These are
visible as earthworks in a marshy platform immediately above the stream bank.
These works were active during the early 18th century.
All post and wire fences and display boards are excluded from the scheduling,
although the ground beneath these features is included.

Roman forts served as permanent bases for auxiliary units of the Roman Army.
In outline they were straight sided rectangular enclosures with rounded
corners, defined by a single rampart of turf, puddled clay or earth with one
or more outer ditches. Some forts had separately defended, subsidiary
enclosures or annexes, allowing additional storage space or for the
accommodation of troops and convoys in transit. Although built and used
throughout the Roman period, the majority of forts were constructed between
the mid first and mid second centuries AD. Some were only used for short
periods of time but others were occupied for extended periods on a more or
less permanent basis. In the earlier forts, timber was used for gateways,
towers and breastworks. From the beginning of the second century AD there was
a gradual replacement of timber with stone.
Roman forts are rare nationally and are extremely rare south of the Severn
Trent line. As one of a small group of Roman military monuments, which are
important in representing army strategy and therefore government policy, forts
are of particular significance to our understanding of the period. All Roman
forts with surviving archaeological potential are considered to be nationally
important.

Roman fortlets are small rectangular enclosures with rounded corners defended
by ramparts and ditches. They were constructed from the first century AD to
the later fourth century to provide accommodation for troops who were attached
to a fort in the same region. Their function was to guard strategic points on
lines of communication or to supply outlying military stations. Only about 50
examples are known nationally.
The Roman fort at Castle Shaw and the fortlet survive reasonably well despite
the damage caused by later land use and a number of archaeological
excavations. They provide an important insight into early Roman strategy and
the arrangements for patrols along this stage of the trans-Pennine road. They
will provide important information on the early occupation of the north of
England. Further information on the relationship of the forts to the road
will be preserved as well as information about the scope and nature of the
civilian settlement attached to the forts.