A Scheduled Monument in Camborne, Cornwall 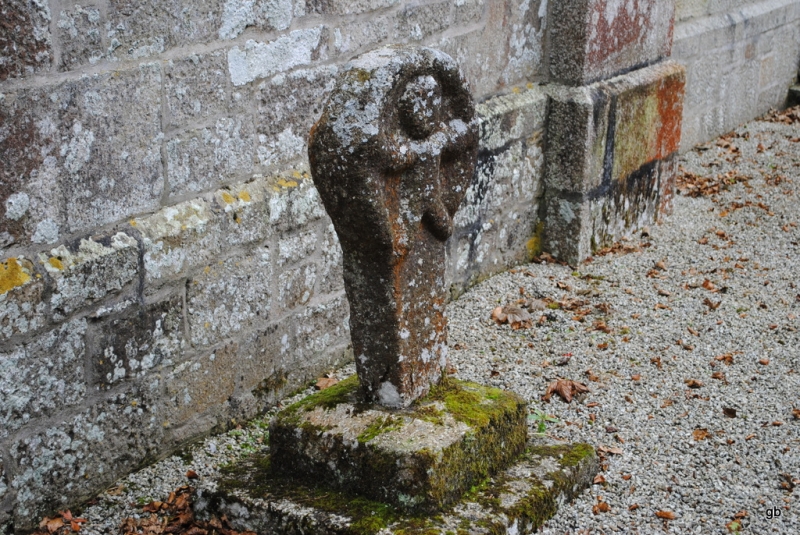 The monument includes a medieval wayside cross situated to the east of
St John's church.
The wayside cross, which is 1.03m high, survives as an upright granite shaft
with a round, `wheel' head mounted on a two step modern granite base. The head
and shaft together measure 0.77m high; the head measures 0.45m wide and 0.17m
thick. The principal faces are orientated ENE-WSW and both are decorated; the
ENE face bears a relief figure of Christ with outstretched arms, legs wide
apart and a narrow bead around the outer edge of the head, terminating at the
neck; the WSW face bears a relief Latin cross, the lower limb extending down
onto the shaft. The shaft, which is mounted in a modern two step granite base,
measures 0.22m wide by 0.14m thick at the base and 0.18m at the top. The top
step of the base measures 0.42m square and 0.14m high, whilst the lower step
is 0.69m square and 0.12m thick.
This cross was originally mounted on a hedge bank at Killivose crossroads, 1km
north west of St John's Church. In 1896 the historian Langdon recorded it as
having been found in a ditch on the Pendarves Estate, and erected on the two
step base in the grounds of Pendarves House. When the house was demolished in
1955 the cross was removed to its present site in the churchyard. The cross is
Listed Grade II.
The modern gravel surface surrounding the cross where it falls within its
protective margin is excluded from the scheduling, although the ground beneath
is included.

The medieval wayside cross in St John's churchyard survives well. It is a good
example of a wayside cross with a rare figure of Christ motif on one face. The
removal and re-erection of the cross, first to a garden in the 19th century,
and to the churchyard in the 20th century, demonstrate well the changing
attitudes to religion and their impact on the local landscape since the
medieval period.