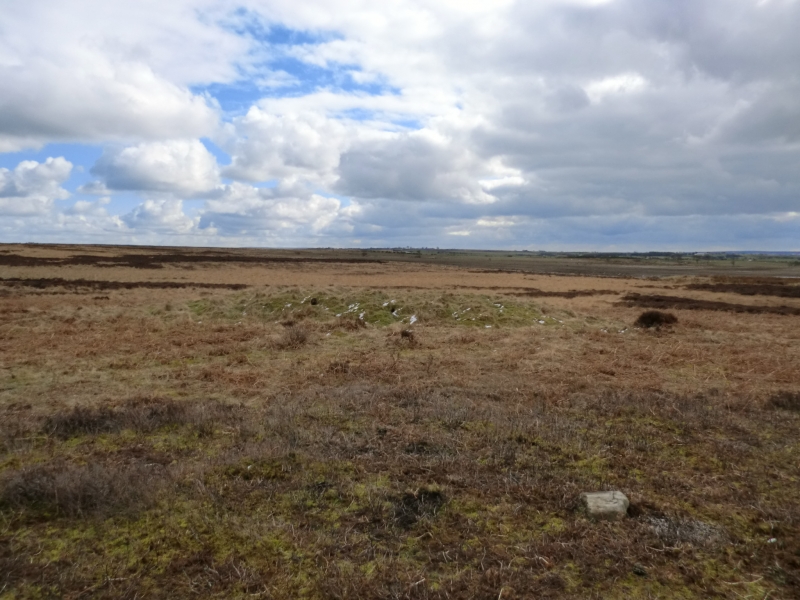 The monument includes a round barrow which lies on a gentle south west facing
moorland slope at the north edge of the North York Moors.
The barrow has an earth and stone mound which measures 17m in diameter and
stands up to 1.2m high. It was originally surrounded by a ditch up to 3m wide
which has become filled in over the years and is no longer visible as an
earthwork, although a slight depression can still be seen around the base of
the mound on the north side. In the centre of the mound there is a hollow
caused by excavations in the past. Investigations by S Anderson in 1852-3
uncovered a cist burial in the centre of the mound, consisting of vertical
stone slabs surrounding a cremation.
The barrow is one of a group of six spread across the west side of Newton
Mulgrave Moor and lies in an area rich in prehistoric monuments, including
further barrows, field systems and settlements.

Despite limited disturbance, the barrow 360m south east of Stang Howe survives
well. Significant information about the original form of the barrow and the
burials placed within it will be preserved. Evidence for earlier land use and
the contemporary environment will also survive beneath the barrow mound and in
the buried ditch.
The barrow is one of a group of six burial monuments and such clusters
provide important insight into the development of ritual and funerary
practice during the Bronze Age. It is situated within an area which includes
other monuments dating from the Neolithic to the Iron Age. Associated groups
of monuments such as these demonstrate a continuity of occupation throughout
the prehistoric period and offer important scope for the study of the
distribution and development of prehistoric activity across the landscape.