A Scheduled Monument in Buildwas, Shropshire 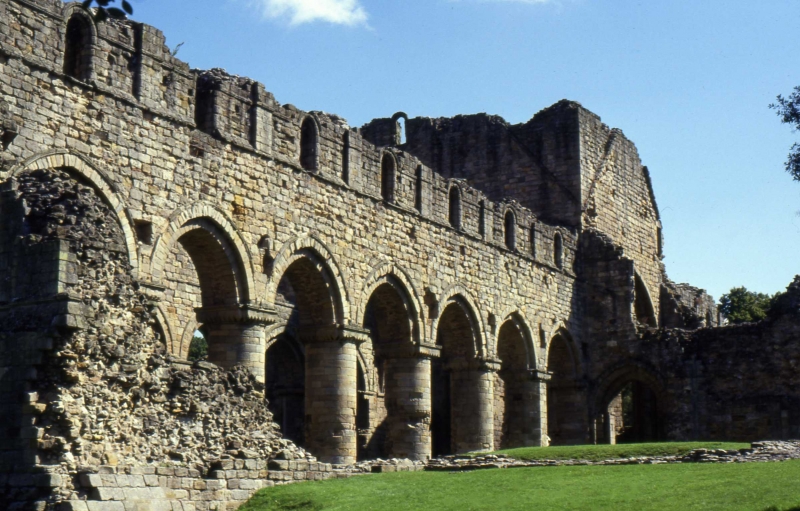 Monasticism was an important aspect of both religious and secular life in
medieval England. Settlements, including monasteries, were built to house
communities of monks, canons (priests) and sometimes lay brothers who lived a
life of religious observance governed by systematic rule. It is estimated from
documentary evidence that over 700 monasteries were founded in England. These
belonged to a wide variety of different religious orders, each with its own
philosophy, and they varied in size from major communities with several
hundred members to tiny establishments with a handful of brethren. As a
result, monasteries vary considerably in their appearance and layout, although
all possess the basic elements of church, living accommodation and work
buildings. Monasteries were inextricably woven into the fabric of medieval
society. They were centres of worship, learning and charity, but also of
immense wealth and political influence and some orders held large estates.
They were established in all parts of England, some in towns and others in the
remotest of areas. Many monasteries acted as the foci of wide networks
including parish churches, almshouses, hospitals, farming estates and tenant
villages.
The Grandmontine order originated in France around AD 1078 when Stephen of
Thiers set up a simple cell in the forest of Muret, outside Limoges. He and
his followers lived an austere existence, and preferred to be known as hermits
rather than monks. In 1124, after Stephen's death, the brethren moved to
Grandmont in Normandy, established their mother house and codified Stephen's
writings. By the middle of the 12th century the popularity of `Stephen's
Rule', and the rapidly increasing number of cells, led to the creation of a
formal order. In the early 13th century, grants of land and rights by powerful
local lords had established three cells in England: at Craswall in
Herefordshire, Alberbury in Shropshire, and Eskdale in Yorkshire. In 1317
Grandmont was raised to the status of an abbey and the three English houses
became priories, though still subject to Grandmont.
At the start of the Hundred Years War with France, most English houses
belonging to French orders (so-called alien priories) were supressed, but the
three Grandmontine houses escaped on account of their poverty. When war was
renewed under Richard II, however, all three were seized by the crown and not
released. The limited excavation that has taken place on Grandmontine sites
has revealed an austerity and changelessness in design which demonstrates the
diversity in form and scale exhibited by monastic sites generally.
Grandmontine monasteries are thus a rare type of a major aspect of English
medieval life. All examples with significant archaeological remains are
considered to be nationally important.

Buildwas Abbey is a fine example of a Savignac monastery which is unusual in
retaining much of its original fabric intact, and in being substantially
unaltered since its early 12th century foundation. This good survival
extends to the extensive fishponds and water management system, which provided
the dietary and economic mainstay of the monastic community.
The standing remains of the abbey retain details of their method of
construction, including the building and decorative techniques employed. The
full extent of the claustral ranges can be established from buried
foundations, and evidence for structures such as gates will survive as buried
remains along the circuit of precinct boundary. Evidence for the construction
of ancillary buildings to the west of the abbey and south and west of the
abbot's house will remain in the form of post holes and buried foundations,
and floor levels within the claustral and ancillary buildings will preserve
environmental and artefactual evidence for the activities which took place
there. All this information will enhance our understanding of the
relationships of the monastic buildings and their various dates and functions.
The subsistence and broader economic setting of this monastic community can be
understood in part from the earthwork remains of the fishponds, leats,
water-meadows and weir, which will retain information relating to their method
of construction and operation, including dams and sluices. Waterlogged
deposits in and around the fish weir will further increase our knowledge of
the operation of this type of device. Evidence for the scale and operation of
the numerous mills will survive as buried features, and the complexity of the
water management systems and the number of major mill sites here point to
industrial working on a large scale. The proximity of the charcoal working
hearths further enhances the impression of this as a centre of industrial
activity, and illustrates the importance, from an early date, of an area which
was to become the centre of the Industrial Revolution. The hearths
themselves will retain evidence for their method of construction and length of
use.
Buildwas Abbey was founded in an area of political instability, and
documentary evidence attests its role during the upheavals of Welsh incursions
and within Ireland. It is thus an important element of the wider picture of
medieval political and social organisation in Shropshire, and also provides an
insight into the varied character of medieval monasticism in England. The
abbey is in the care of the Secretary of State and is open to the public.