Churchyard cross in All Saints churchyard 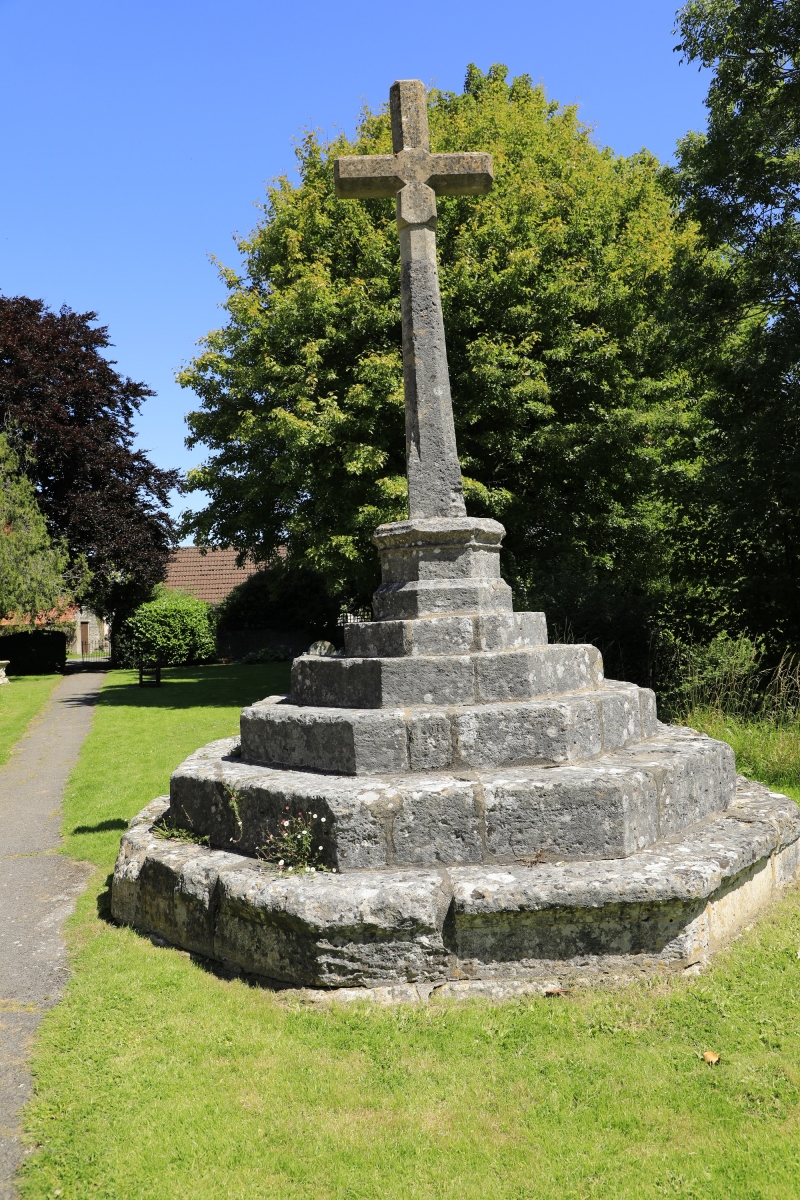 The monument includes a restored cross situated in the churchyard at Kingston
Seymour c.4m south east of the church.
The cross, which is Listed Grade II, has a five step octagonal calvary, socket
stone, shaft and simple Latin cross head. The first step of the calvary is
0.4m high, and the second, third, fourth and fifth steps are 0.33m, 0.28m,
0.25m and 0.2m high. The first step is 3.8m in diameter with mortared
flagstones on its upper surface forming an overhanging drip, each side of its
octagon being 1.5m long. The width of the octagonal sides of the second,
third, fourth and fifth steps are 1.17m, 1m, 0.72m and 0.5m respectively.
Above the fifth step of the calvary is the octagonal socket stone. The socket
stone has a deep drip on its upper surface which is chamfered obliquely and
below this is a fillet decoration. The lower surface of the socket stone is
bevelled outwards. It is 0.8m wide and 0.55m high with each side of its
octagon being 0.32m long. The central socket 0.3m square in which sits the
square base of the shaft. The shaft is c.1.5m high; its square base is stopped
and the shaft continues in octagonal form as it tapers to a simple Latin cross
head.
The calvary is constructed from stone blocks and mortared flagstones, and the
socket stone is hewn from one piece of stone. Investigation by probing around
the base of the cross at the time of the field visit showed that there appears
to be a platform of stones around the cross and beneath the surface of the
grass at a depth of c.0.1m and to a width of 0.8m from the edges of the
calvary, except on the north west side where a path abuts the cross. The shaft
and cross head were erected in 1863 by Mr James Flack who also designed the
restored cross head. At the same time the calvary, which was in a dilapidated
condition, was repaired. The cross is dated to the 15th century.
There is the socket stone of another cross in the village c.150m to the
north east of the churchyard cross. This has now become incorporated into a
war memorial. It is thought to have been part of the village cross, but there
is no indication of its original location.
The surface of the churchyard path is excluded from the scheduling where this
falls within the area in which buried stone has been recorded, although the
ground beneath is included.

Although the shaft and cross head has been replaced, the standing cross in the
churchyard at Kingston Seymour survives well as a visually impressive monument
of the medieval period in what is likely to be its original location. The
medieval cross relates to the 13th century Church of All Saints.