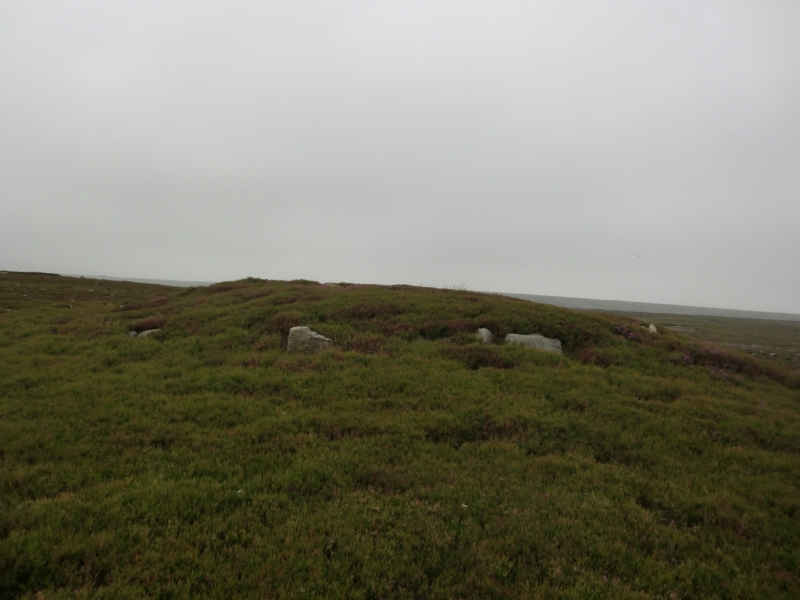 Entry Name: Bowl barrow known as Hob on the Hill and another barrow 60m to the north of it

The monument includes two bowl barrows situated in a prominent position on
the north edge of the North York Moors.
The barrows lie close together, one being 60m to the north west of the other.
Both of the barrows have an earth and stone mound and each was originally
surrounded by a kerb of stones which defined the barrow and supported the
mound. However, over the years some of the stones have been removed or buried
by soil slipping off the mounds. The southern barrow stands 1.5m high and is
19m in diameter. There are kerb stones visible on the west side. A boundary
stone, 1.2m high and 0.3m square, stands on the top of the mound. The south
face of the stone is carved with the date 1798 and the letters R C, whilst
the north face is engraved with the name Hob on the Hill. The northern barrow
mound is 20m in diameter and stands 1.3m high. There is a well preserved kerb
around the east side of the mound where there are large stones, up to 1.3m
long, set on edge and small stones laid in two courses. Both these mounds were
partly excavated by J C Atkinson in 1863. In the southern mound were found
three cremation burials with pottery vessels and a flint knife and arrowhead.
In the northern barrow was found an urn containing a cremation burial.
The barrows lie in an area rich in prehistoric monuments including further
barrows, field systems and clearance cairns.

Despite limited disturbance, these barrows have survived well. Significant
information about the original form of the barrows and the burials placed
within them will be preserved. Evidence of earlier land use will also survive
beneath the barrow mounds.
Together with other barrows in the area they are thought to also represent a
territorial marker. Similar groups of monuments are known across the west and
central areas of the North York Moors, providing important insight into burial
practice. Such groupings of monuments offer important scope for the study of
the division of land for social and ritual purposes in different geographical
areas during the prehistoric period.