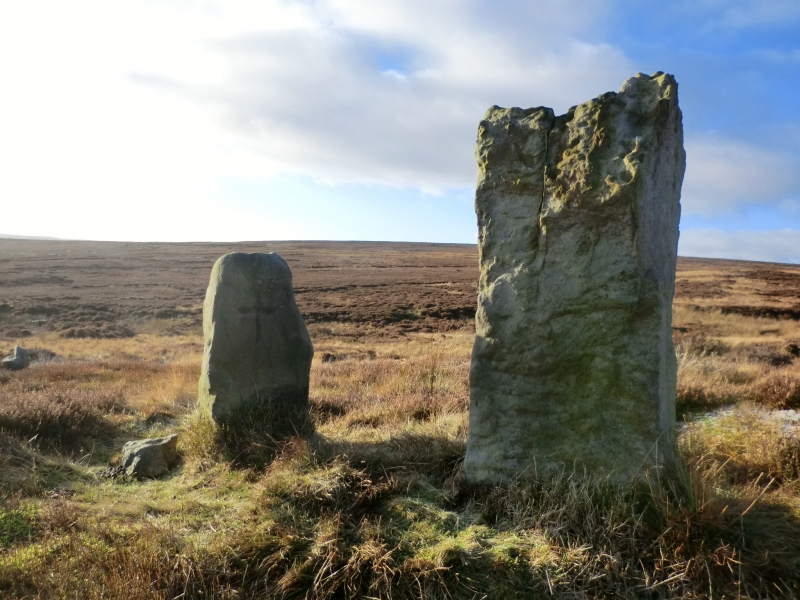 The monument includes a cross ridge dyke incorporating an earlier stone
alignment extending for 510m southward from the crest by the Hob on the Hill
round barrow to the edge of North Ings Slack.
The dyke is a discontinuous earthwork 410m in length built around an alignment
of small exposed standing stones. The earthwork comprises a bank up to 5m wide
and 0.75m high with a ditch to the west up to 2.5m wide and 0.4m deep. In some
places there is a marked counterscarp bank to the west of the ditch up to 1.5m
wide and 0.4m high.
The stone alignment includes a series of stones, placed individually and in
close-set groups. The stone alignment extends beyond the earthwork by 100m to
terminate at the bank North Ings Slack.
Excavations in 1991 revealed that the stone alignment originally included more
stones than now survive and that the aligment existed for some time before the
ditch was dug and the stones were partly encapsulated by the bank.
The monument lies in an area rich in prehistoric remains including field
systems and burial mounds.

The cross ridge dyke north of North Ings Slack survives well and important
archaeological remains will be preserved within it. It it demonstrates a
sequence of construction from a stone alignment to a more substantial
earthwork. Similar monuments survive elswhere in the region. The monument lies
in close proximity to major prehistoric burial sites and it is thought that
the substantial and impressive dyke may also have had a ritual function.