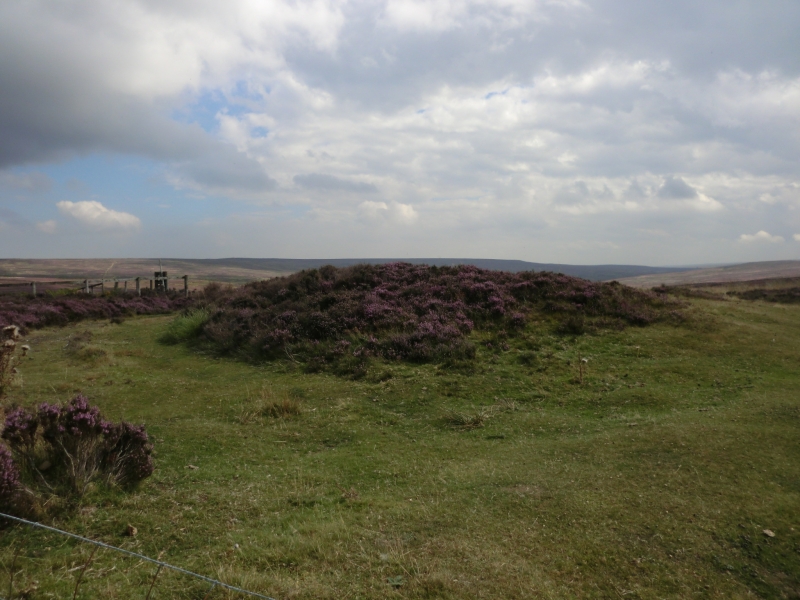 The monument includes a bowl barrow situated in a prominent position on the
north edge of the North York Moors
The barrow has an earth and stone mound standing 1.2m high. It is round in
shape and 12m in diameter. The mound was partly excavated in 1961 when a
narrow trench was cut across the centre. This excavation revealed a stone
cist, or box-like structure to house a burial, which measured 1.2m by 0.66m
and 0.45m deep. Within the cist was a scatter of cremated bone and a small jet
bead. In common with other similar barrows in the area the mound was
surrounded by a kerb of stones which defined the barrow and supported the
mound. However, over the years the stones have disappeared or been buried by
soil slipping from the mound.
The excavation trench was dug in advance of the rebuilding of a stone wall
crossing the mound which has now been demolished, although a distinct hollow
is still clearly visible.
The barrow lies in an area rich in prehistoric monuments including further
barrows, field systems and clearance cairns.

Despite limited disturbance, this barrow has survived well. Significant
information about the original form of the barrow and the burials placed
within it will be preserved. Evidence of earlier land use will also survive
beneath the barrow mound.
Together with other barrows in the area it is thought to also represent a
territorial marker. Similar groups of monuments are known across the west and
central areas of the North York Moors, providing important insight into burial
practice. Such groupings of monuments offer important scope for the study of
the division of land for social and ritual purposes in different geographical
areas during the prehistoric period.