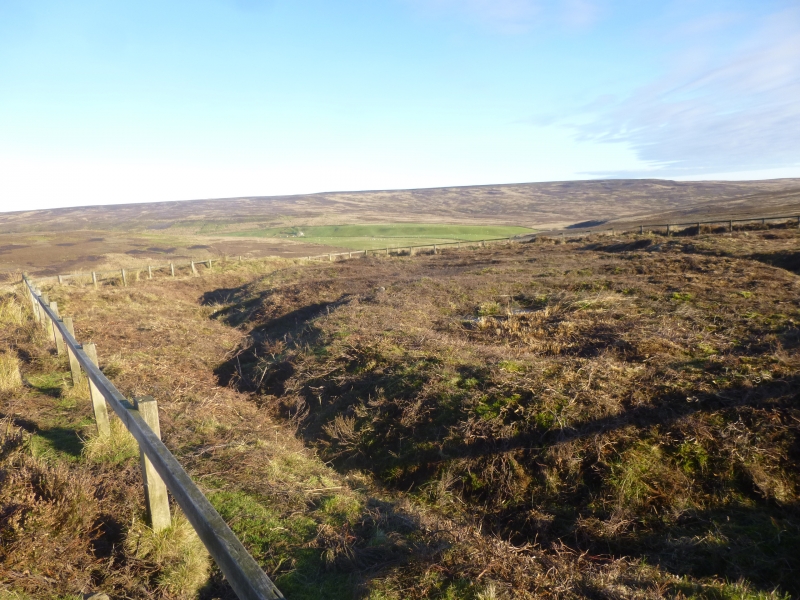 The monument comprises a cross base with the broken remains of the shaft
cemented into the socket. It stands on the east side of the road from Percy
Cross Farm to the open heathland on Kildale Moor. The road represents the
medieval trackway to the upland grazing and the cross is a waymarker for that
route. The cross also marks the boundary of the abbey lands of Guisborough
Priory and is mentioned in a deed of the 13th century.
The base of the cross is of fine gritstone and measures 0.62m on the north
side and 0.51m on the west side. It stands 0.44m high above ground. The socket
hole measures 0.3m by 0.24m. In this socket is the shaft which is broken off
level with the top of the base and sufficiently worn to suggest that it was
broken off many years ago. The shaft has an iron pin leaded into the broken
shaft and also broken off short.
The base is earthfast but the ground has been eroded on the west side by the
digging of a drainage ditch beside the road.
The base is Listed Grade II.

The cross on Percy Cross Rigg is not only a wayside cross which defines the
medieval route from Kildale to the upland grazing on Kildale Moor, it is also
mentioned in the chartulary of Guisborough Priory in a 13th century deed as
one of the markers of the boundary of the monastic lands.
The cross survives well in spite of the loss of its shaft and head.
The cross gives us insight into the medieval Christian organisation of the
landscape and the reverence expected of travellers during this era.