A Scheduled Monument in Churchill, Oxfordshire 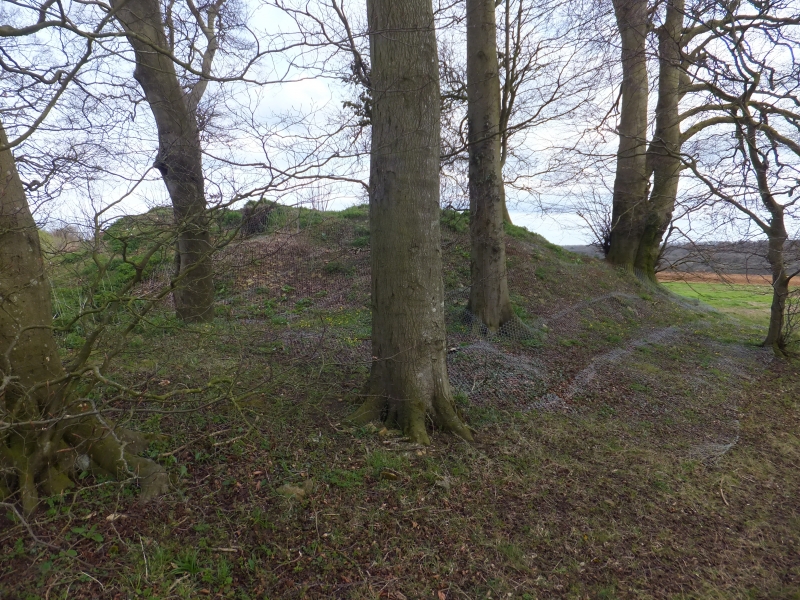 The monument includes an upstanding Bronze Age bowl barrow known locally as
the Besbury Lane barrow situated immediately south of Besbury Lane, 450m north
east of Conduit Farm. The barrow sits on a false crest with views overlooking
slight valleys to the south and west.
The barrow mound, which was planted with trees to create a landscape feature
in the last century, measures 27m in diameter from east-west and stands up to
2.7m high. From north-south its original diameter has been reduced to about
20m by cultivation over time. Its top is roughly level and has a diameter of
9m. There are two slight features cut into this which might represent part
excavation but are more probably collapsed badger tunnels.
Surrounding the mound is a quarry ditch from which material was obtained
during its construction. The ditch measures about 3m wide and survives as an
infilled feature to the south and around the remainder of the circuit as a
partly infilled feature visible as a c.0.3m deep depression.
The mound is very stony and there is a relatively modern dry stone wall
revetting part of the mound. Its size and flat top suggest that the barrow may
have been reused for burials in the early medieval period.

Despite reduction of the southern side of the mound due to cultivation
in the past, the Besbury Lane bowl barrow survives as a good example of its
class and will contain archaeological remains and environmental evidence
relating to its construction and the landscape in which it was built.
The barrow may have been reused for burial in the early medieval period.