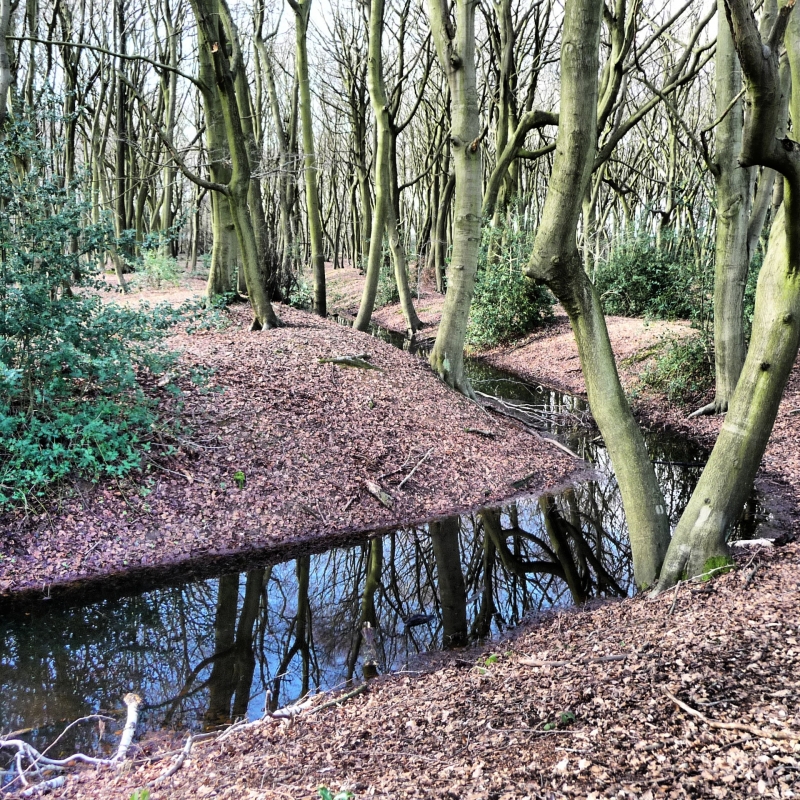 The monument includes a medieval moated site surrounded by banked and ditched
enclosures located within a small wood known as Redding Wick, which lies to
the east of the village of South Heath on an elevated section of the Chiltern
plateau between the Missenden valley and Herbert's Hole.

The moated site is roughly rectangular in plan. The island measures
approximately 50m east to west and 35m north to south and is surrounded by a
ditch averaging 8m across and 2m deep, the base of which is seasonally wet and
contains deep deposits of humic silt. The interior of the island is slightly
raised and encircled by a perimeter bank measuring c.3m in width and 0.8m
high, which may have been strengthened by a timber palisade during the period
of occupation. Flint foundations were noted on the island in the 1930s and the
positions of former buildings remain visible as small raised areas adjacent to
the bank. Fragments of medieval pottery, dating from around the 13th century,
were discovered on the island in 1974. A large external bank, c.5m in width
and 1m high, surrounds the moat on all but the western side, which is flanked
by more elaborate earthworks defending the entrance. A narrow causeway spans
the centre of the western arm of the moat leading to a gap in the internal
bank. The other end of the causeway is linked to a narrow rectangular spur, 6m
in width, running along the outer edge of the western ditch. The spur is
surrounded to the north and west by extensions from the moat, allowing access
only at the southern end where a low platform marks the probable location of a
gatehouse. A second structure, perhaps a tower, may have stood on a second
platform at the northern tip of the spur.

The moated site is surrounded by a series of enclosures defined by low banks
and shallow external ditches. These are thought to have contained the buried
remains of ancillary buildings such as barns and stables; the earthworks being
designed to keep out deer and other grazing animals, rather than for defence.
The earliest of these enclosures surrounds all but the southern side of the
moated site. The northern boundary runs parallel to the northern arm of the
moat at a distance of c.25m, and extends in an elongated arc some 80m to the
west. To the east, the boundary curves around the north east corner of the
moat and continues parallel to the eastern arm. This final section was later
adapted to form part of the woodbank which encircles Redding Wick. The
enclosure is sub-divided by a low bank linking the northern boundary to the
north western end of the bank surrounding the moat; the western sub-division
contains a shallow pond which may be an original feature of the site. A short
section of bank extends between the south eastern corner of the moat and the
eastern woodbank, separating the northern enclosure from a second enclosure to
the south of the moated site. This enclosure is roughly rectangular, measuring
some 120m east to west and 30m north to south; and is also defined to the
south and east by the woodland boundary which superseded the earlier perimeter
earthworks. The woodbank here, as elsewhere around the perimeter of the wood,
is approximately 2.5m wide and 0.7m high and flanked by an external ditch, 3m
wide and 0.6m deep. A small sub-rectangular pond, perhaps a medieval fishpond,
lies within the south western corner of the enclosure, just inside the line of
the bank. On the north side of this stands a small mound, c.6m in diameter and
0.6m high, supporting the flint foundations of a circular structure considered
to be the remains of a dovecote. A low bank flanked by a shallow ditch to the
west extends northwards from the woodbank towards the south western corner
of the moat, dividing the southern enclosure from a third enclosure to the
west. This western enclosure shares a short section of the southern woodbank,
but is otherwise defined to the south and to the west by a low bank and
shallow external ditch forming two sides of a square, each c.90m in length.
Traces of a gap in the southern arm appear to mark the main entrance to the
complex. The western arm is connected to the western end of the northern
enclosure, and also forms a junction with a further bank, with ditches to
either side, which extends between the northern enclosure and the western
boundary of the wood. This latter feature appears to be a property boundary,
contemporary with the northern enclosure, and is therefore included in the
scheduling.

The charters of Missenden Abbey contain a number of references to the early
history of the site, known in the medieval period as `la Rudinge' or
`Rudingia'. A parcel of land of this name was owned in the late 12th century
by Hugh de Nuier and tenanted by Robert del Broc. The abbey also held certain
rights in the property which were relinquished in exchange for grants of land
between 1190 and 1208. Ownership may have passed from Hugh de Nuier to Henry
de Crokesle, and thereafter to Henry Scaccario, who granted the land to
Missenden Abbey in the early 13th century. It appears to have been held
briefly from the abbey by a priest named Radulfus; after which, and before
1217, it was granted to Thomas, son of William de Ibeston. By the early 1230s
possession had almost certainly passed to Roger de Wymberville. The first
reference to a dwelling on the site is contained in a charter dated 1233-38.
This records Roger's oath to the abbey that its church would suffer no loss of
tithes and obligations as a result of the establishment of a chantry at his
chapel at `la Rudinge'. The chapel may have stood within one of the adjacent
enclosures, but is more likely to have formed part of the buildings on the
island.

All fences and fence posts are excluded from the scheduling, although the
ground beneath these items is included.

The monument at Redding Wick includes a well preserved example of a strongly
defended, single island moated site. Artefactual evidence contained within the
undisturbed interior of the island and the fills of the surrounding ditch will
illustrate the duration of occupation, the character of which may be further
determined from the buried remains of buildings on both the island and the
entrance earthworks. The ditch will also contain environmental evidence for
the appearance and management of the landscape in which the monument was set.

The surrounding enclosures are well defined and provide valuable evidence
on the developing function of the settlement. The dovecote, in particular,
is a specific indication of the high status of the site . The perimeter
earthworks appear to have been designed to safeguard the enclosures from
grazing animals, suggesting that evidence for cultivated areas, perhaps
gardens, may exist in addition to the buried remains of ancillary buildings,
yard surfaces and trackways.

The surrounding woodbank was similarly designed to prevent deer and other
animals from damaging the cultivated woodland which superseded the settlement.
The later boundary demonstrates a continuity with the earlier enclosures; a
relationship which poses important questions about the date of its
construction and the manner in which the settlement came to be abandoned.