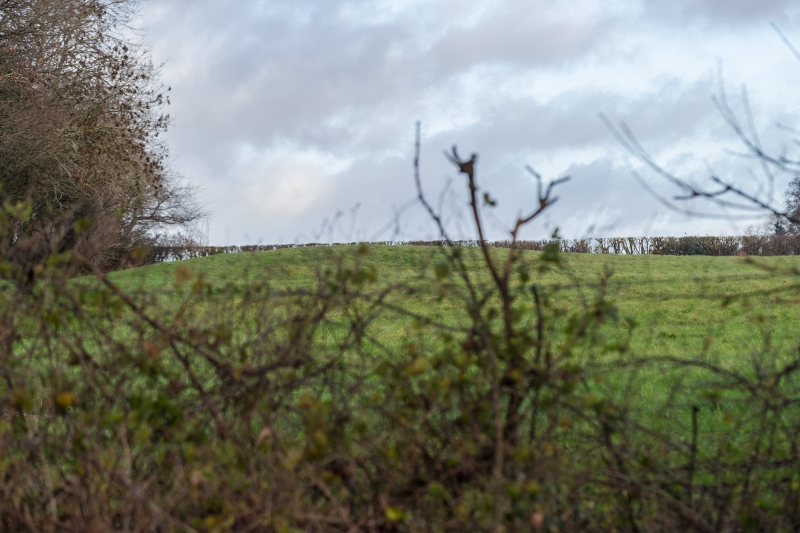 The monument includes a small motte and bailey castle situated above the north
slope of a shallow valley, sited to overlook the natural valley routeway which
is today followed by the course of the A413. The motte survives as a mound
27m in diameter with an average height of 1.7m. The bailey lies on the south
side of the mound and is oval in plan measuring 35m north-south by 30m east-
west. It is enclosed by an earthen bank 12m to 18m wide and up to 1.2m high
on its exterior side and 0.3m high on its interior. There are traces of a
ditch which surrounds both motte and bailey around the north-east side of the
monument. This survives here as a low earthwork 4m wide and 0.4m deep;
elsewhere it survives as a buried feature of similar width. There is no trace
of any entrance or causeway, though this probably lay in the southern quarter
of the site. The earthworks have been reduced and spread by past ploughing,
unusual in that the motte as well as the bailey has been ploughed, suggesting
that it was never a large mound. Though slight, the monument is a very
complete example of a motte and bailey castle probably built as part of a
military campaign and occupied for only a short time. The motte is likely to
have been surmounted by a wooden tower, designed to create a secure vantage
point, while the bailey may have been surrounded by a wooden palisade designed
to provide a secure camp.

Castle Tower motte and bailey is unusual in its diminutive size and, though
reduced by past ploughing, it survives well as a very complete example of this
class of monument. Despite the past ploughing of the site, its isolation from
subsequent settlement and probably short duration of occupation indicates that
primary deposits will survive largely undisturbed. The monument also contains
environmental evidence relating to the landscape in which it was constructed
and the economy of its inhabitants. Such evidence will survive in the land
surfaces sealed beneath the motte, and in buried features within the bailey.