A Scheduled Monument in Hatherop, Gloucestershire 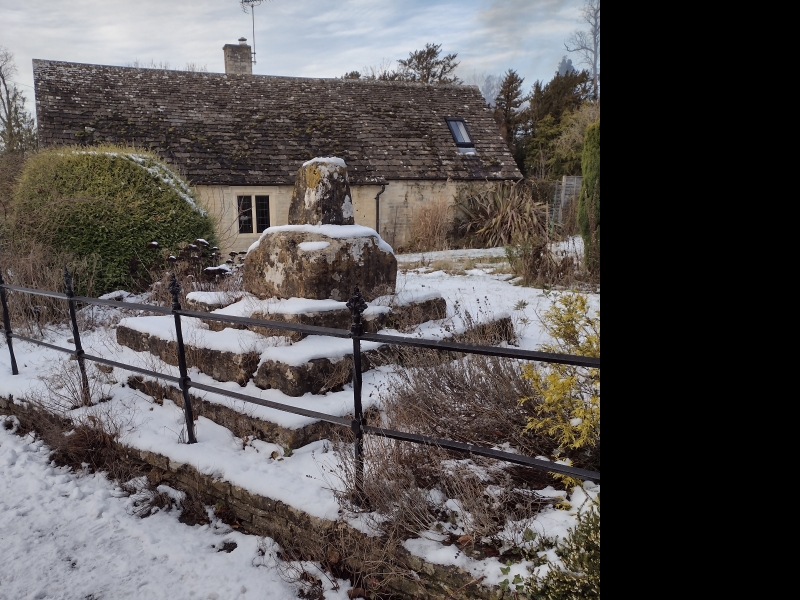 The monument includes part of a wayside cross shaft embedded in its original
socket on a three step calvary, situated in a garden bordering the road in the
village of Hatherop.
The stone base of the calvary is 2.7m square and 0.15m high; the next step is
2.2m square and 1.75m high, and the third step is 1.45m square and 0.2m high.
Above this the socket stone is 0.8m square and 0.45m high. It is octagonal
above with broaches at the angles, each side of the octagonal measuring 0.4m.
The socket in which the shaft is embedded is 0.35m square. The stump is part
of an octagonal shaft, squared by broaches and fixed with lead into the
socket. The shaft measures 0.45m high and tapers from its basal width of 0.35m
to c.0.3m.
This wayside cross was open to the road in the last century, and has been
dated to the late 14th century.
Excluded from the scheduling are the low garden wall and the iron railings
embedded in the wall where these fall within the cross's protective
margin, although the ground beneath these structures is included.

Despite the shaft being broken, the wayside cross at Hatherop survives well
with many of its original elements intact in what is likely to be its original
location beside the road. The garden wall does not detract from the monument
and serves as protection from passing traffic.