Churchyard cross shaft and base in St Petroc's churchyard, 30m south east of the church

A Scheduled Monument in Padstow, Cornwall 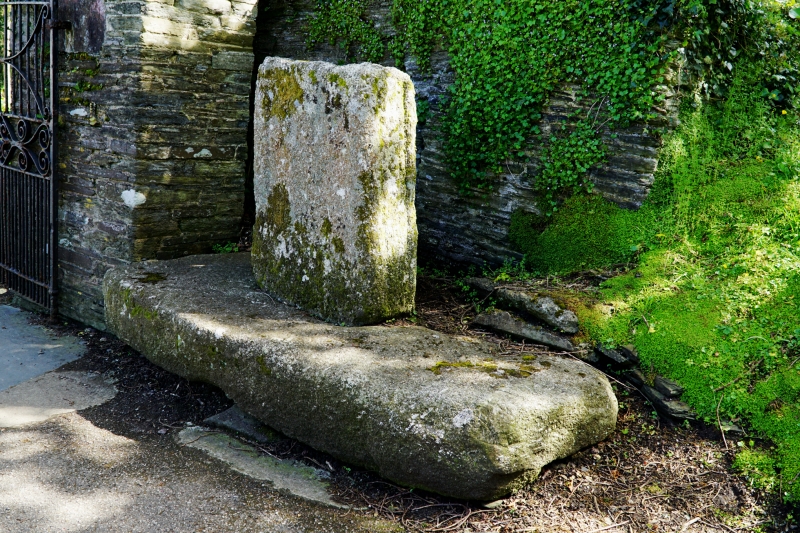 The monument includes a medieval churchyard cross shaft and base situated by
the south east entrance to St Petroc's churchyard at Padstow on the River
Camel estuary on the north coast of Cornwall.
The cross is visible as a large fragment of an upright granite shaft set in a
massive rectangular base stone. The cross measures 1.42m in overall height.
The shaft measures 0.84m wide at the base, tapering to 0.71m at the top and is
0.32m thick. There is a 0.1m wide bead on all four corners. All four faces of
the shaft are decorated, though this decoration is very worn: on the north
principal face is a panel of plaitwork; the two sides are decorated with
interlace designs, and the south principal face bears a crudely executed fleur
de lys design. The fleur de lys was a symbol of the Virgin Mary. The shaft
is set in a roughly rectangular granite base which measures 2.39m east-west by
up to 1.16m north-south and is 0.36m high.
This churchyard cross is located by the south east entrance to St Pedroc's
churchyard. It was discovered in 1869 while excavating a grave for William
Sowden, to the north west of its present position. The cross shaft and base
were found 0.45m below the ground surface, and were probably in their original
position, having been buried as the level of the churchyard rose around them.
The historian Langdon in 1896 recorded a local tradition that the cross head
and upper shaft are buried in the churchyard. It has been suggested that the
shaft and base were fractured from the upper shaft and head during the
Commonwealth period. Langdon also records that when excavating a grave for a
Molly Walters, close to where the shaft and base were found, a cross head was
found but not removed. It has been suggested that this cross shaft and base
are part of a cross head and shaft in the grounds of Prideaux Place to the
north west of the church, but Langdon thought that this was unlikely, as there
was not sufficient evidence to link the two cross fragments together. A more
recent theory is that this cross shaft and base are part of the massive cross
head at St Michael's, Porthilly on the other side of the Camel estuary to
Padstow, though again there is no conclusive evidence. The historian Hencken
in 1932 dated the cross shaft to the 11th century but the interlace designs on
the shaft suggest a tenth century date.
The metalled surface of the footpath immediately to the north of the cross but
within its protective margin is excluded from the scheduling but the ground
beneath is included.

This churchyard cross shaft and base in St Petroc's churchyard have survived
reasonably well. It forms a good example of an elaborately decorated cross
shaft, and is the largest shaft and base in Cornwall. The fleur de lys symbol
on the south face of the shaft is an unusual motif. The burial of the cross
shaft and base, their discovery and re-erection in their present location in
the 19th century, illustrates well the changing attitudes to religion that
have prevailed since the Reformation and the impact of these changes on the
local landscape.