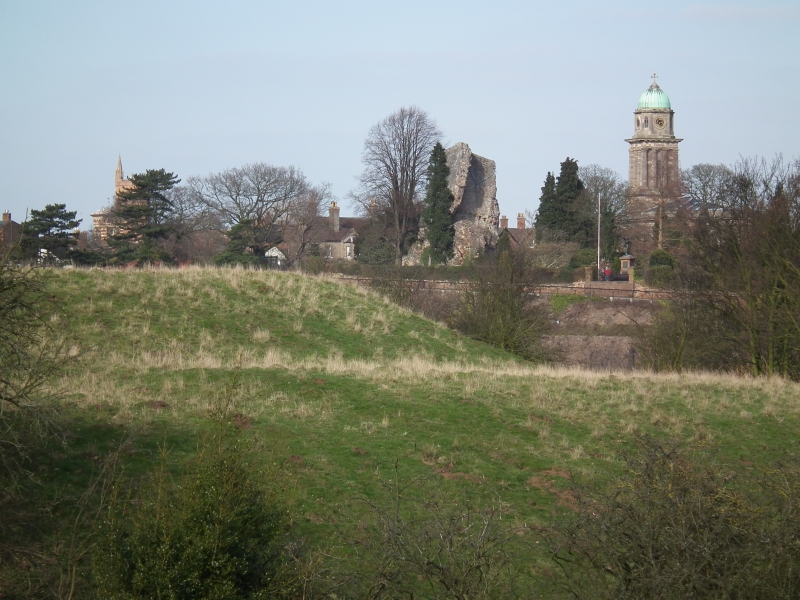 The monument includes the remains of a substantial ringwork and bailey castle
and a building platform situated on Panpudding Hill, a steep sided promontory
south of Bridgnorth and overlooking, to the east, the valley of the River
Severn and, to the north, a steep sided valley. The ringwork is intervisible
with the ruined Bridgnorth Castle, a tower keep castle (the subject of a
separate scheduling) which occupies the southern tip of Castle Hill, a higher
spur 250m to the north east, on the north side of the valley. The positions of
both castles have been chosen for their strategic strength controlling a
crossing place on the River Severn. Stylistically Panpudding Hill ringwork
appears to be the earlier of the two, but its foundation has been attributed
to Henry I who is believed to have constructed it in 1102 as a stronghold
during his siege against the northern castle held by Robert de Bellesme.
The castle earthworks are designed to make maximum use of the natural
defensive strength of the hill. The ringwork itself is roughly oval in plan
with maximum dimensions of 84m north east to south west by 68m transversely.
The defences include a strong outer scarp averaging 3.5m high which has been
created by cutting back the natural hillslope around the north, east and south
sides of the spur to steepen the natural slope. This cutting into the slope
has created an outer berm, averaging 3m wide around the north and north east
and up to 14m wide around the south and south east. The ringwork outer scarp
was continued around the west side of the hill, the natural approach
along the ridge, by cutting a substantial ditch up to 8m wide and 1m deep
across the neck of the spur. The summit of the prominence created is roughly
circular in plan with a diameter of 50m. Around the west and south edges of
this summit a substantial flat topped bank averaging 10m wide and 1m high has
been constructed to strengthen the defences. The defended internal area of the
ringwork is level and measures 47m north east to south west by 32m
transversely. At the western end of the southern, outer, berm a lower terraced
platform has been created against the south east junction between the ringwork
and bailey. This may represent the site of a roughly rectangular building
approximately 18m east to west by 10m transversely.
Attached to the west side of the ringwork and separated from it by its
western ditch, is a well defined enclosure, or bailey, within which domestic
buildings associated with the castle would have been protected. It extends
from the ringwork along the line of the ridge to the west and is roughly
rectangular in plan; bounded on its north, west and south sides by a well
defined scarp averaging 2.5m high. The fourth, east, side is formed by the
western edge of the ringwork ditch. The bailey has internal dimensions of 44m
east to west and transversely narrows from a width of 40m adjacent to the
ringwork, to 18m at its western end. At the south east corner are earthworks
representing an inner bank up to 0.5m high. At the western end of the bailey
the inner bank is up to 6m wide and 0.9m high and, has an outer ditch 10m wide
and 1.2m deep which cuts roughly north west to south east across the line of
the spur. The ditch is believed to continue as a buried feature around the
north and south sides of the bailey.
All boundary features which fall within the area of the scheduling are
excluded from the scheduling although the ground beneath is included.

The ringwork and bailey on Panpudding Hill is a particularly fine example of
this rare class of monument. The ringwork and the bailey defences remain
undisturbed and will retain valuable archaeological information relating to
their construction, and to the character of their occupation. Although the
interior of the bailey has been ploughed in the past it remains in good
condition and will retain archaeological information buried below the
ploughsoil. Environmental evidence relating to the landscape in which the
earthworks were constructed will be preserved beneath the ramparts and in the
ditch fill. The proximity of Bridgnorth Castle which lies only some 250m to
the north east and the likelihood that the two sites are in some way
associated increases the archaeological and historical importance of the site.
Such monuments, when considered either as single monuments or in relationship
to other monuments of a similar period which occur in close proximity,
contribute valuable information relating to the settlement pattern, social
organisation of the countryside and military technology during the medieval
period.