A Scheduled Monument in Harford, Devon 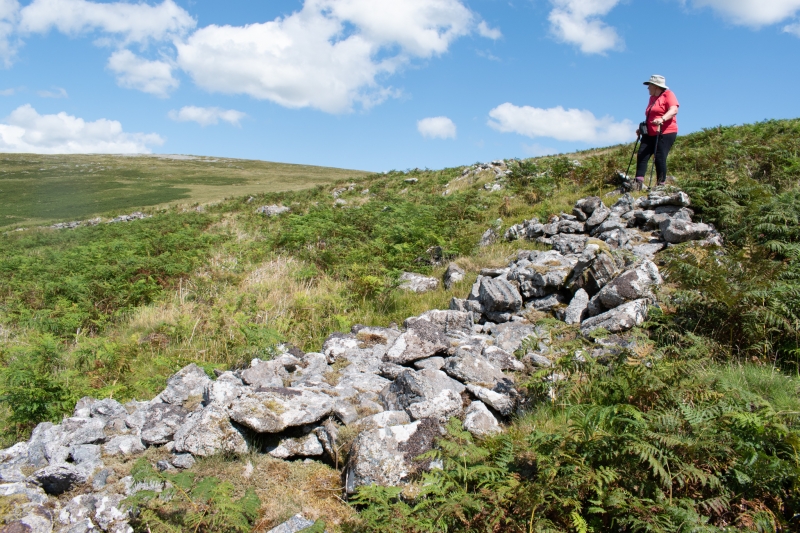 The Dartmoor landscape includes many discrete plots of land enclosed by walls
or earth and stone banks, which acted as stock pens or protected areas for
crop growing. Some of them were subdivided to accommodate hut dwellings for
farmers and herdsmen. Many examples date to the Bronze Age (c.2500-500 BC),
though earlier and later ones also exist.
This is a roughly circular enclosure situated on the steep west-facing slope
of Higher Piles newtake at Piles Corner. It is 60 m. in diameter, with walls
2 to 3 m. thick and 0.5 m. high, and a 2 m. wide entrance on the south side.
There are two hut circles attached to the inside of the wall, one 10 m. in
diameter with walls 2 m. thick and 0.3 m. high, the other 8 m. in diameter
with walls 2 m. thick and 0.5 m. high with lynchets on the uphill side. Three
further hut circles lie outside the enclosure to the east; all are terraced
and approximately 9 m. in diameter, with walls which include large set
stones up to 0.7 m. high and each with an entrance facing the south.

Dartmoor is the largest expanse of open moorland in Southern Britain and
because of exceptional conditions of preservation, it is also one of the most
complete examples of an upland relict landscape in the whole country. The
great wealth and diversity of archaeological remains provides direct evidence
for human exploitation of the Moor from the early Prehistoric period onwards.
The well-preserved and often visible relationship between settlement sites,
major land boundaries, trackways, ceremonial and funerary monuments as well
as later industrial remains, gives significant insights into successive
changes in the pattern of land use through time.
This is a well-preserved enclosure with hut circles inside and immediately
associated with it, forming an integral part of the concentration of
settlement along this stretch of the Erme Valley. It provides important
insight into farming practices and how farming and stock rearing communities
lived on the Moor during the Prehistoric period.