A Scheduled Monument in Woodhouse, Nottinghamshire 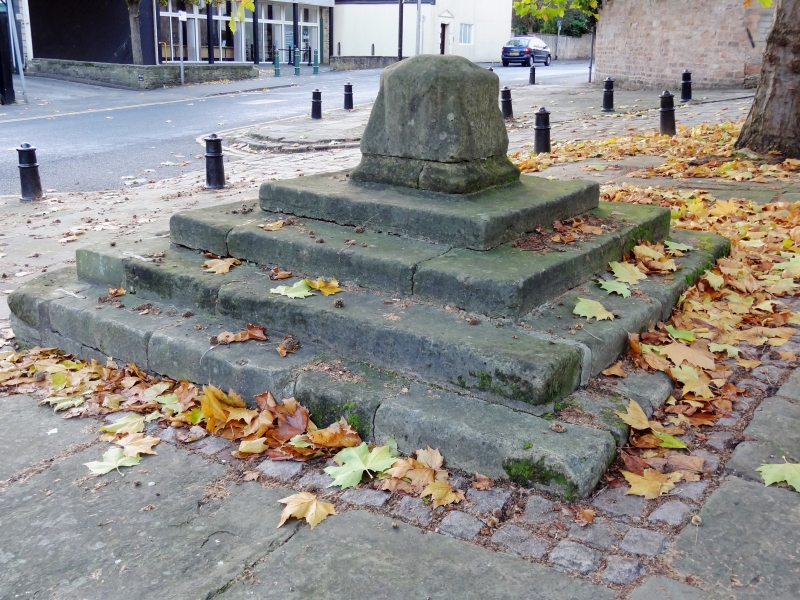 The monument is a medieval standing cross whose remains include a base or
calvary of four steps surmounted by a socle or socket stone. Originally, there
would also have been a shaft and cross head but these components are now
missing.
The bottom step of the calvary is c.2m square and is partially hidden by the
modern cobbled surface surrounding it. Where it is exposed at the north west
corner, it shows the step to be constructed of three layers of pavings. The
remaining steps consist of single layers of more massive blocks. The total
height of the calvary is c.1m.
The socket stone is in two sections comprising a moulded plinth measuring
c.70cm square and, mortared onto that, an octagonal block with pyramid stops
on alternate faces. The total height of the socle is c.75cm. The surface of
the octagonal section rises towards the centre in eight segments before
levelling off. This level surface is c.15cm square and includes a circular
hole at the centre which would have housed the peg that formerly held the
cross shaft in place. The small size of the surface onto which the shaft
fitted indicates that the shaft itself was very slender. This suggests that it
may have been a wooden cross rather than a stone one and may account for why
the shaft and cross head are missing. Alternatively, a stone shaft and cross
head may have been vandalised by 16th or 17th century iconoclasts.
The modern surface surrounding the monument is excluded from the scheduling
though the ground underneath is included. The cross is Listed Grade II.

Though missing its shaft, the cross on Church Street is a reasonably well-
preserved and visually impressive example which appears to be in its original
location. Its proximity to the church suggests that it played an important
role in religious festivals during the Middle Ages.