Griff Cross, wayside cross 800m NNE of Griff Farm on the road from Helmsley to Rievaulx 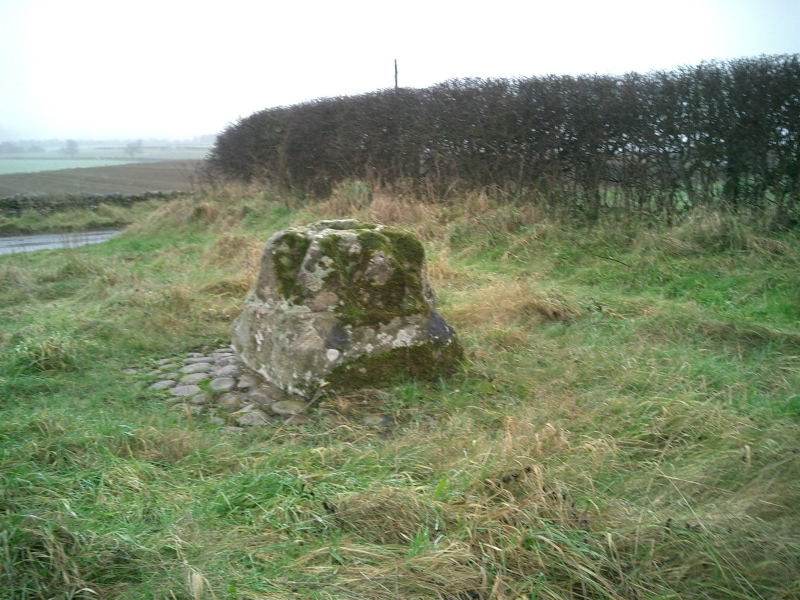 The monument comprises a cross base known as Griff Cross wayside cross on the
junction of the B1257 out of Helmsley and the road down to Rievaulx Bridge.
The shaft and head are missing. It stands on a plinth of cobbles about 7m from
the edge of the road.

The cross base is a block of fine grained sandstone squared and measuring
0.9m in each dimension at the bottom. The block has been sculpted to form
triangular shapes on each face dividing it into an octagonal shape at the top.
The block is 0.68m in height. It has been set into a circular plinth of
cobbles 2.36m in diameter. The socket for a cross in the top is octagonal and
0.14m deep. The quality of the carving is still remarkable and relatively
unworn. This represents the best that a late medieval mason could do.

The cross base is a fine piece of carving and is not, as was commonly thought,
a portion of a pillar from Rievaulx Abbey which is only a mile away. It was
sculpted for the missing octagonal shaft which was probably headed by a carved
lantern. This type of cross is late in date and may have been erected as a
prestigious religious introduction to the lands of the abbey. It also marked
the way down to the Rievaulx Bridge from the road from Helmsley to Ryedale and
Bilsdale. This route to the bridge is known as the Sperragate in a Rievaulx
charter of AD 1160.

The wayside cross known as Griff Cross survives well in spite of the loss of
the shaft and head. Enough survives to indicate the type of cross and that the
date of its construction is the late medieval period. It is in its original
position and marks a point on the old road from Helmsley to Rievaulx Bridge
known as Sperragate from 12th century Rievaulx charters.