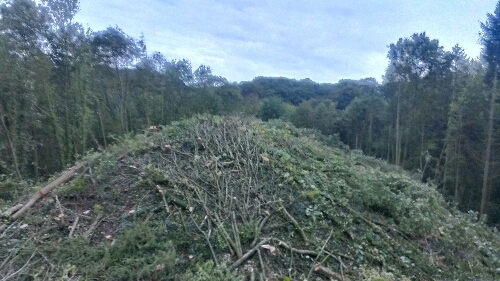 The monument at Oldcastle consists of a motte castle located at a
strategic position along a narrow promontory formed by a meander of Wych
Brook on the England-Wales border by Fitz Hugh, Baron of Malpas.
The site comprises a motte c.30m x 11m situated in a central position
along the promontory. The motte is protected by a well defined system
of defensive features that include 3 short traverse ditches overlooking
the river to the SE of the motte, and two further ditches with adjacent
banks across a narrow spur linking the promontory with meadows to the
NW. Steeply wooded slopes down to the Wych Brook offer protection at
the NE and SW sides of the monument. The sum of the evidence suggests
that this monument is not a typical example of its type.
All fencing bounding the scheduled area is excluded from the scheduling,
as is the gate giving access along the narrow spur linking the meadow
and promontory.

The motte castle at Oldcastle is of particular importance as one of a
group of early post-conquest (c.1100) mottes forming a defensive system
aimed at curbing constant Welsh raids on the rich farming areas of south
Cheshire. Equally important, however, was the role these sites played in
imposing the new post-conquest feudal order on the area.
This example illustrates well the diversity of form and size of this
class of monument.