A Scheduled Monument in Malpas, Cheshire West and Chester 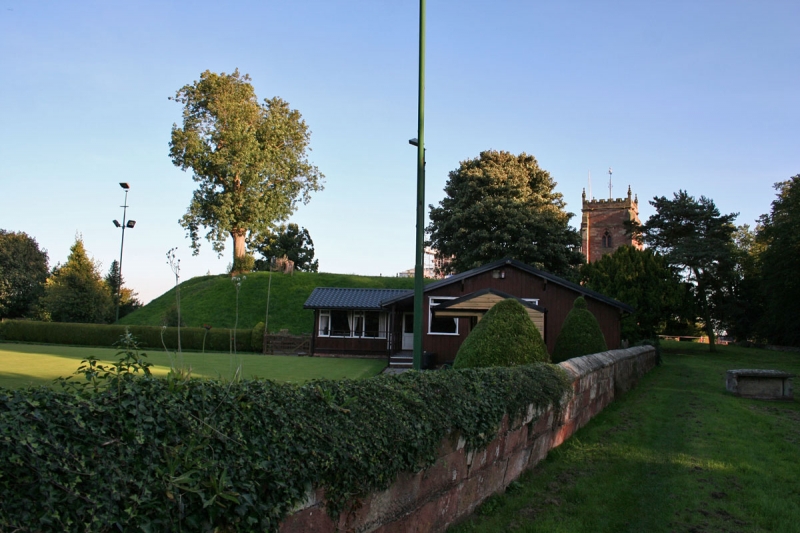 The monument at Malpas comprises the remnants of a medieval castle
surviving as a truncated earthwork cone, situated at a strategic
position on a spur of the Broxton Hills overlooking the town and much of
the surrounding countryside. The site was originally home to the Barons
of Malpas.
The motte lies N of St Oswald's Church, the graveyard of which extends
to the S and W sides of the motte. A bailey was probably originally
attached to the S side of the motte, but is now indistinct and its site
has been considerably disturbed by construction of the church and
burials in the churchyard. In view of the uncertainty over the precise
location of the bailey and the disturbed nature of this most probable
location it is not included in this scheduling.
The motte is bounded by a hedge and chestnut fencing and these are
excluded from the scheduling. The property boundary and the churchyard
boundary to the SE, S and W of the motte are also excluded from the
scheduling as is the tarmac lane to the E. The ground beneath all these
features, however, is included.

The motte castle at Malpas is of particular importance as one of a group
of early post-conquest (c.1100) mottes forming a defensive system aimed
at curbing constant Welsh raids on the rich farming areas of south
Cheshire. Equally important, however, was the role these sites played in
imposing the new post-conquest feudal order on the area.
Whilst the bailey of this site has been destroyed, the motte itself
remains in good condition and will retain considerable information
relating to its date, use and method of construction.