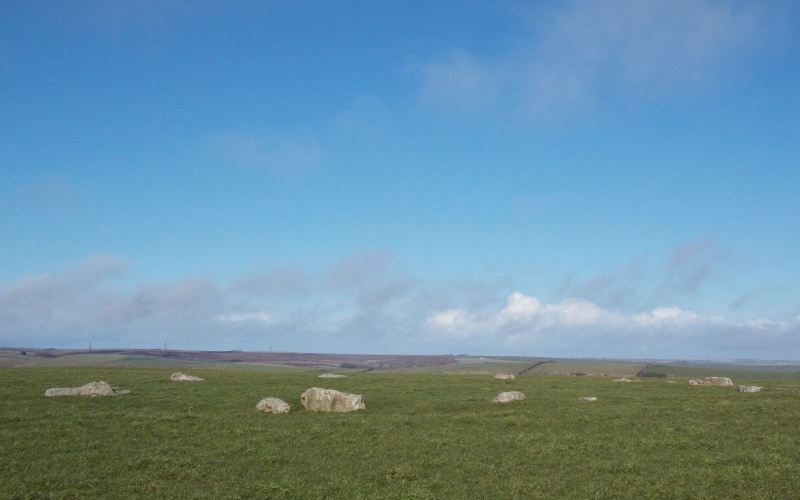 The monument includes a large irregular stone circle situated on a chalk
ridge overlooking the surrounding downland.
The monument, which is often referred to as the Kingston Russell stone circle,
has a maximum diameter of 30m and now contains 18 visible stones. The site is
almost circular in plan and the interior of the monument is set on level
ground. The stones, which are of sarsen or conglomerate, are now all recumbent
and vary in size from 2m by 0.5m to 1m by 0.3m. Partial burial may mean that
some stones are significantly larger than the current exposure would suggest.
There are records of two additional stones lying outside of the stone circle,
but it is uncertain whether this location is original.
Excluded from the scheduling is the information notice board situated on the
south eastern side of the monument, although the underlying ground is
included.

Stone circles are prehistoric monuments comprising one or more circles of
upright or recumbent stones. The circle of stones may be surrounded by
earthwork features such as enclosing banks and ditches. Single upright stones
may be found within the circle or outside it and avenues of stones radiating
out from the circle occur at some sites. Burial cairns may also be found close
to and on occasion within the circle. Stone circles are found throughout
England although they are concentrated in western areas, with particular
clusters in upland areas such as Bodmin and Dartmoor in the south-west and the
Lake District and the rest of Cumbria in the north-west. This distribution may
be more a reflection of present survival rather than an original pattern.
Where excavated they have been found to date from the Late Neolithic to the
Middle Bronze Age (c.2400-1000 BC). It is clear that they were designed and
laid out carefully, frequently exhibiting very regularly spaced stones, the
heights of which also appear to have been of some importance. We do not fully
understand the uses for which these monuments were originally constructed but
it is clear that they had considerable ritual importance for the societies
that used them. In many instances excavation has indicated that they provided
a focus for burials and the rituals that accompanied interment of the dead.
Some circles appear to have had a calendrical function, helping mark the
passage of time and seasons, this being indicated by the careful alignment of
stones to mark important solar or lunar events such as sunrise or sunset at
midsummer or midwinter. At other sites the spacing of individual circles
throughout the landscape has led to a suggestion that each one provided some
form of tribal gathering point for a specific social group. Large irregular
stone circles comprise a ring of at least 20 stone uprights. The diameters of
surviving examples range between 20 and 40 metres, although it is known that
larger examples, now destroyed, formerly existed. The stone uprights of this
type of circle tend to be more closely spaced than in other types of circle
and the height and positioning of uprights also appears not to have been as
important. They are widely distributed throughout England although in the
south they are confined largely to the west. Of the 250 or so stone circles
identified in England only 45 examples of large irregular circles are known.
As a rare monument type which provides an important insight into prehistoric
ritual activity all surviving examples are worthy of preservation.

The Kingston Russell stone circle survives well and will contain
archaeological and environmental evidence relating to the monument and the
landscape in which it was constructed.
The stone circle is one of only four known to survive within the area.

Other
Mention location of additional stones,
Mention name of site,