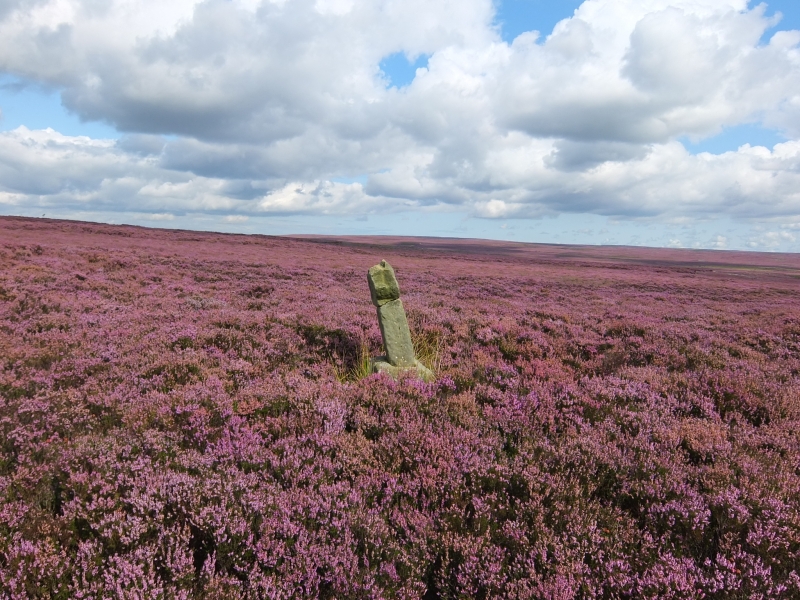 The monument comprises a cross base, cross shaft and cross head with a
fragment of the original cross shaft set up beside it. It stands on open
managed moorland 1100m WSW of the farm called Piethorn on the Carr Cote Ridge
on Helmsley Moor.
The cross is made from local fine gritstone. The base measures 0.63m by 0.6m
at the ground and tapers to 0.5m by 0.48m. The base stands 0.47m high. The
socket is 0.31m by 0.22m. In the socket is the broken shaft whose deep
rippling may be the remains of a sculptured interlace design. The shaft
measures 0.25m by 0.22m wide and 0.55m high. Above the shaft, fixed with
cement is a fragmentary cross head, originally rounded, with a Maltese cross
incised on the west face. Beside the cross on the south side, is a further
piece of the shaft set up in the turf. This measures 0.27m by 0.22m and
stands 0.57m high. This has a cross incised on the top surface. Such crosses
appear to be the location marks of an estate boundary.
Both standing structures should be considered as parts of the same monument.

The cross known as the Roppa South Cross on Helmsley Moor survives well in
spite of the evidence of a broken shaft and battered head. It is in its
original position at the side of an important medieval trackway from Helmsley
to Bilsdale.