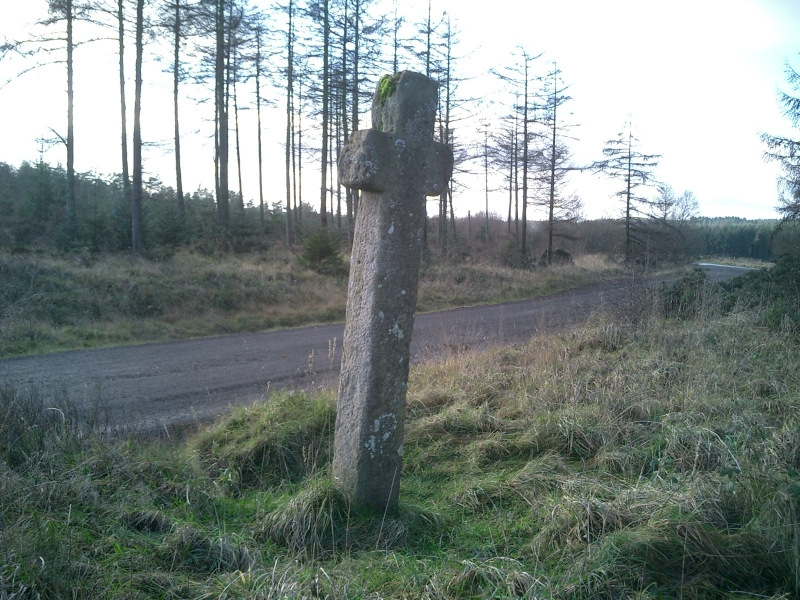 The monument comprises a wayside cross called Mauley Cross. It stands 80m to
the east of the line of the Roman road from Cawthorne Roman camps north to New
Wath Farm. This route was a trackway in the medieval period.
The cross is carved from a single slab of fine gritstone. It stands 3m north
of the forest track called the Brown Howe Road, on a raised bank 1.5m above
the road surface. It is earthfast without a socket.
The cross stands 2.12m high, facing north-south. The shaft is 0.27m by 0.23m
wide. The head is carved out at a point 1.57m from the ground. The arms of
the cross are 0.25m wide and project 0.13m from the shaft. There is an OS
benchmark on the north face; otherwise there is no trace of ornament or
decoration. The cross is worn and weathered so that the arms appear to be
rounded.
The cross dates from the medieval period and is a wayside religious symbol for
the ancient trackway which continues the use of the Roman road. It takes its
name from the landowning De Mauley family of Mulgrave.

The Mauley Cross wayside cross still stands as a reminder of the important
line of communication marked by the Roman road beside it to the west.
The cross is in good condition although weathered and its survival as a single
piece of stone is remarkable.
It also reminds us of the religious organisation of the medieval landscape and
the piety expected of the travellers of that period.