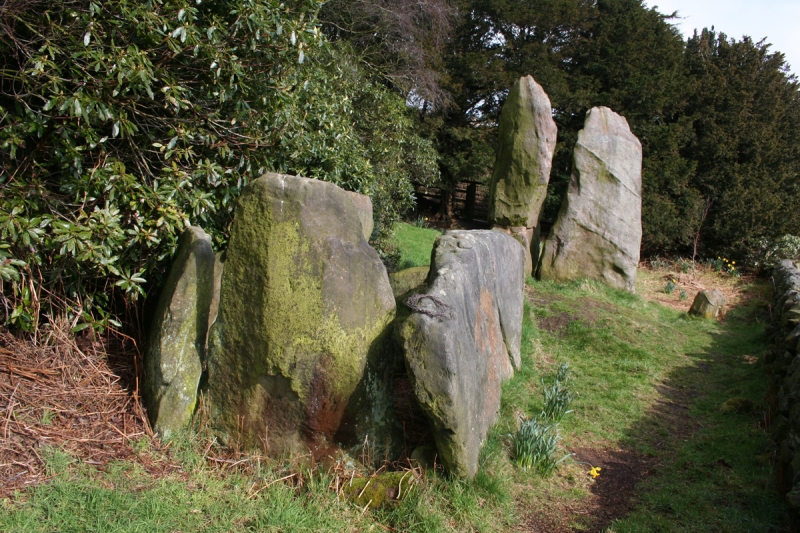 The monument is the Bridestones Neolithic chambered long cairn located on the
western flank of Cloud Hill, a ridge forming a prominent northern extension of
Biddulph Moor, with extensive views across the Cheshire plain to the west. The
monument includes a chambered tomb measuring 6m x 2.7m made of large stone
slabs set on edge and divided into two by a now broken cross slab. South of
the chamber's entrance is a portal stone standing 3m high while north of the
entrance is a re-positioned portal stone 1.2m high. To the east of the chamber
is a forecourt originally surrounded by a complete or partial circle of stones
of which 3 survive. Limited excavation of the forecourt during the 1930's
revealed cobbling which included a charcoal layer containing flint blades and
a flint scraper. The long cairn covering the chamber was recorded in 1764 as
being c.110m long x 11m wide. It was largely carted away for roadmaking that
year. A second chamber in the centre of the mound was recorded as measuring
c.2.2m square x 1m high and a third chamber was noticed in 1766. A plan of the
monument in 1766 shows four portal stones - two north and two south of the
chamber's entrance. The forecourt was surrounded by six stones in
semi-circular form with two conjectural stones completing the circle. Two
stones stood within the circle and two stood outside the circle to the east.
A drystone wall, all fences and information signs are excluded from the
scheduling, although the ground beneath all these features is included.

Stone long cairns were constructed as drystone mounds covering stone-built
tombs, often megalithic in character, which served as vaults or chambers in
which successive burials or cremations were placed during the Early Neolithic
period (3400 - 2400BC). They represent the burial places of Britain's early
farming communities and, as such, are amongst the oldest field monuments
surviving visibly in the present landscape. Where investigated they appear to
have been used for the burial of only certain privileged members of the
community, often with only partial human remains selected for interment. It is
probable, therefore, that these monuments acted as important ritual sites for
local communities over a considerable period of time. Some 500 long cairns
and long barrows, the earthen equivalents of the stone cairns, are recorded in
England. As one of the few types of Neolithic structures to survive as
earthworks, and due to their comparative rarity, their considerable age and
their longevity as a monument type, all long cairns are considered to be
nationally important.
Despite the removal of the covering cairn, the Bridestones long cairn retains
important features including its internal burial chambers and the entrance
features which provided access into the monument. It is an unusual outlier to
the main regional groupings of such megalithic long cairns, these lying mainly
further south, in Wales or the Cotswold - Severn areas, or further north, in
south-western or western Scotland.