A Scheduled Monument in Launceston, Cornwall 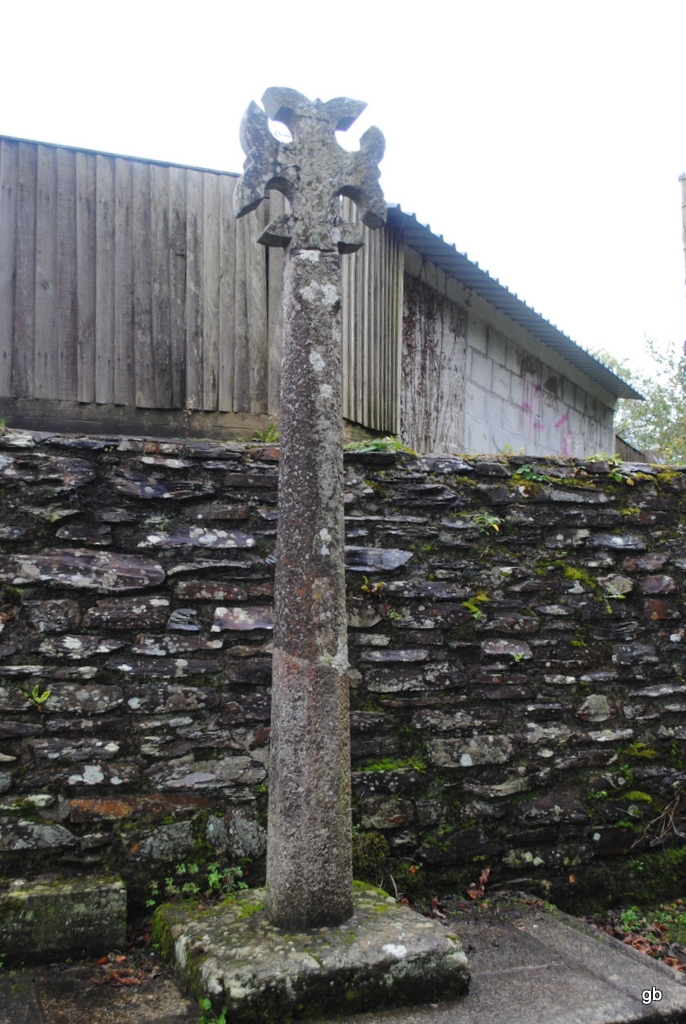 The monument includes a wayside cross known as the Dunheved Cross and a
protective margin around it, situated beside a minor road next to the main
east-west route, the modern A30 road, on the southern outskirts of Launceston
in east Cornwall.
The Dunheved Cross is visible as an upright granite shaft and head set in a
two stepped base. The cross is a composite structure of three medieval cross
parts found in the vicinity, together with a modern lower shaft and lower base
step. The upper basal step is a medieval cross base originally located at the
Badash, or Dunheved, crossroads, 20m north of the monument's present location.
The upper shaft of the monument was discovered 400m to the south west at
Badash Farm and is considered to have derived from the cross base when
complete. The cross head was discovered in a field on Tresmarrow Farm, 1.3km
to the WSW. The separate pieces were assembled, with the modern lower shaft
and lower base, at the Badash cross-roads in 1902. The resulting cross was
re-erected 20m further south to its present site when the Launceston by-pass,
the A30 trunk road, was built in 1981.
The cross head measures 0.56m high by 0.46m and is 0.12m thick, carved as an
unenclosed equal-limbed Latin cross. The cross motif is highly stylised: each
of the four limbs terminates with a curved flourish to either side, each
flourish forming one side of an incomplete round hole in the limb's quadrants.
This gives the head the overall impression of a Celtic cross, with the limbs
linked by a ring. The ends of the north east limb and the two flourishes from
the lower limb have repaired fractures.
The octagonal-section shaft, including the lower modern section, measures
2.28m high, tapering from 0.27m wide at the base to 0.16m wide at the top,
where the shaft becomes square in section. The north west face of the shaft
has two filled holes. The lower 0.85m of the shaft is modern, replacing the
missing section of shaft. The medieval stone base, forming the upper step of
the present basal structure, measures 0.8m square and 0.1m high. This base is
mounted on a modern granite base, the present lower step, measuring 2.7m long
by 1.1m wide. This modern base consists of two rectangular blocks of granite
with a grooved and moulded step at either end. The front of this modern base
is inscribed `Dunheved Cross'. On the rear edge of the modern base, 0.12m
north east of the medieval cross-base, is a stone plaque inscribed `1902 This
cross was restored and placed here near to its ancient site to commemorate the
Coronation of King Edward Vll'.
The cross base was found at the crossroads called Dunheved or Badash Cross,
20m north of the monument, in the 19th century; it was removed and built into
a hedge when the roads were widened and was recorded in 1896 by the historian
Langdon. At the turn of the century the upper section of monument's shaft was
discovered at Badash Farm by a Mr Cowland. In 1896, Langdon also noted the
cross head, found close to a hedge in a field near the Alexander Slate Quarry
at Tresmarrow and then removed to Launceston museum.
The three parts of the monument were assembled together and re-erected near
the original site of the Badash Cross on 27 June 1902, to mark the coronation
of Edward Vll. In 1974 the cross was removed while the Launceston bypass was
built; by 1981 it had been re-erected, 20m to the south in its present
location above the southern bank of the new road.
The Dunheved Cross is situated beside the modern line of the main medieval
route into Cornwall from the River Tamar crossing 2km to the east of
Launceston, a major administrative centre and market town during the medieval
period. This route is marked at intervals by several other medieval wayside
crosses and was later followed by the post-medieval turnpike road and by the
modern A30 trunk road. The monument also stands close to the original site of
the cross base at the Badash, or Dunheved, crossroads on one of the main
routes south out of Launceston.
The metalled surface of the modern road passing to the west and north west of
the cross base and the surface of the modern footpath to the north east and
south west of the cross base but within the area of the protective margin, are
excluded from the scheduling but the ground beneath is included.

The medieval components of the Dunheved Cross have survived reasonably well;
despite the loss of the lower shaft section they show only minor damage from
their period of reuse and burial. The unusual elaborate design of the cross
head is unique in Cornwall and the monument as a whole shows features of the
uncommon later medieval crosses. The monument remains by the original former
crossroads marked by the cross base and formerly by the upper shaft, on the
route from the south to the market town and administrative centre of
Launceston, demonstrating the role of wayside crosses and showing clearly the
longevity of many minor roads still in use. The former slighting of this
cross, the known history of the shaft's reuse and of the burial of the head
and base, together with the monument's subsequent assembly and re-erection,
illustrate well the changing religious attitudes since the Reformation.