A Scheduled Monument in Lanivet, Cornwall 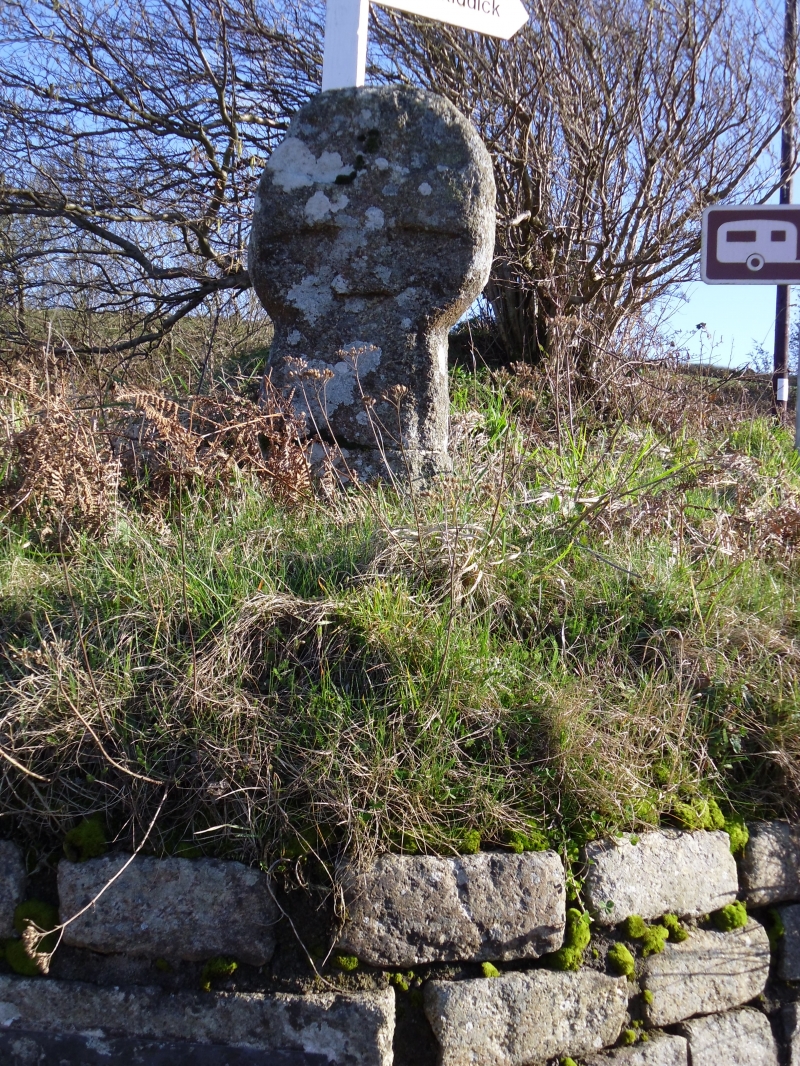 The monument includes a medieval wayside cross, known as the Reperry Cross,
and a protective margin around it, situated at a road junction to the
south east of Lanivet in mid-Cornwall, on an ancient route across the Cornish
peninsula from Padstow on the north coast to Fowey on the south coast. The
Reperry Cross is also Listed Grade II.
The Reperry Cross survives as an upright granite cross 1.04m high with a round
`wheel' head, the shaft set firmly in the ground. The cross head measures
0.45m high by 0.48m wide and is 0.25m thick. Each principal face bears a
relief equal-limbed upright cross with slightly expanded limbs, 0.43m from tip
to tip. On the south face, the perimeter of the head has a narrow bead 0.03m
wide. The shaft measures 0.59m from the turf to the base of the head, tapering
upwards to the neck from 0.42m wide at ground level to 0.32m at the neck, and
from 0.26m thick at ground level to 0.2m at the neck. Both principal faces of
the shaft are decorated with a relief central panel running the length of the
shaft, tapering slightly from 0.28m wide at ground level to 0.24m at the neck.
The shaft has been fractured in the past and repaired; the cemented join is
0.36m above ground level. The shaft is recorded as being set in a modern base,
now completely covered by turf.
The Reperry Cross is situated on a low bank at the south east side of a
junction of six roads on a major ancient route across central Cornwall linking
the Camel and Fowey estuaries. This route, whose usage is considered to extend
back into the prehistoric period, is marked by other surviving medieval
wayside crosses, reflecting its prominence as a medieval pilgrimage route for
travellers from Ireland and Wales to the south Cornish ports en route to holy
sites on the Continent. This route is now commemorated by a long distance
footpath, the Saint's Way, which passes by this cross. This is also one of
several surviving crosses marking routes within the parish to the church at
Lanivet. The Reperry Cross marks an early direct route from Bodmin to St
Austell, both important administrative centres and market towns during the
medieval period. The Reperry Cross is recorded as in its original location,
but for many years it was missing, having been built into a hedge. The
historian Langdon in 1896 records the cross as missing but with the base
remaining in situ. About 1926 it was rediscovered by the historian Charles
Henderson and it was replaced in its former location on a new base; a small
plaque in the hedge below the cross records this event by the inscription
`Reperry Cross restored by Robert Edgecombe'.
The metalled surface of the modern roads passing by the cross but within the
area of the protective margin is excluded from the scheduling but the ground
beneath is included.

The Reperry Cross has survived well in its original location. It forms a good
example of a wheel-headed cross complete with head and shaft. Its position at
a junction on an important early route across the Cornish peninsula, used
since the prehistoric period, later forming a major medieval pilgrimage route
and now reverted to minor roads in the modern highway system, demonstrates
both the longevity of many routes still in use and the development of the road
network. This monument also shows clearly the relationship between wayside
crosses and early thoroughfares, evident at a local level by the cross's
position marking a route to the parish church at Lanivet.