A Scheduled Monument in Dorstone, Herefordshire, 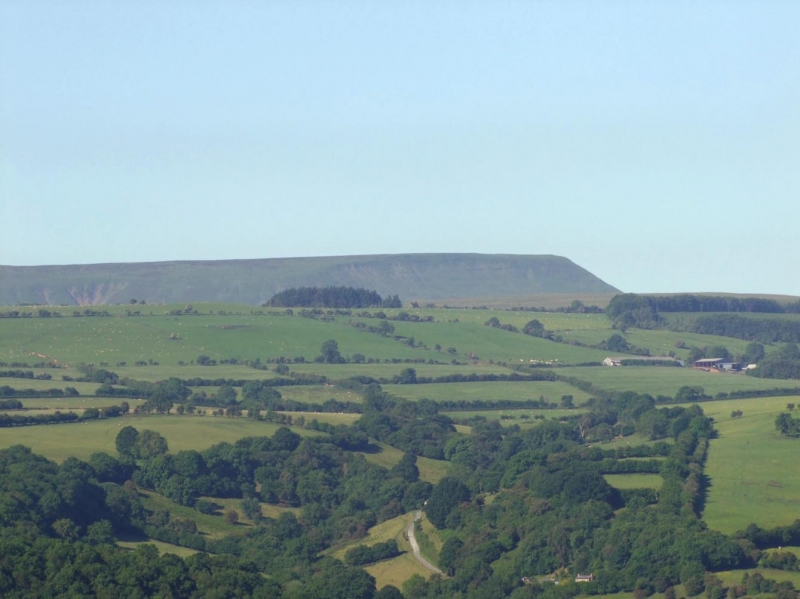 The monument known as Arthur's Stone includes the remains of a Neolithic
chambered tomb situated above a south west facing slope overlooking the valley
of the River Dore. Most of the earthen mound, which would have originally
covered the tomb, has been removed or has eroded away, exposing the stone
infrastructure at its centre. This includes a burial chamber or cromlech and
an entrance passage. The chamber is composed of nine orthostats standing up to
1.1m high, five of which support a capstone of massive proportions. This is
now broken approximately midway along its length but would originally have
measured 5.9m long by 3.7m wide at its widest point and it is up to 0.6m
thick. With the limited resources available to the Neolithic people who
constructed the tomb, raising this roof stone would have been a considerable
feat requiring the organised effort of the whole community. The chamber is
approached by an exposed, stone lined, entrance passage from the north west
edge of the barrow. This is formed by nine stones arranged to form a linear
passage 0.8m wide. It runs for 5m approximately east to west before turning at
right angles to the south for 2.9m. This section is 1.2m wide with a
constriction 1m from the turn, possibly representing the position of a
deliberate blocking. Some 3m to the south east of the chamber, still within
the area originally covered by the mound, are two upright stone slabs. One is
1.2m high by 1.7m wide, the second 0.8m high by 1m wide. A `trilithon' (an
arrangement of two upright stones supporting a third stone at either end to
form a lintel) was recorded in the outer circle in 1900 when repair work,
`following a dislodgement' was carried out to replace a leaning stone in
an upright position. This seems to be a reference to these two south eastern
slabs which may therefore represent the position of the trilithon. During the
work carried out at this time stone hammers, heavy mauls and stone chips were
found.

Traces of the mound which once covered the stones can be recognised
surrounding the chamber. In its present form it is roughly oval in plan, lies
on a roughly east to west orientation, and measures c.22m WNW to ESE by 19m
transversely. There are exposed kerb stones, apparently undisturbed, around
the edge of the mound in its south east quarter. Another large stone is just
visible in the ditch across the road from the chamber, apparently lying on its
side, c.3m north west of the monument. Known locally as `Arthur's Stone', its
function and the nature of its relationship to the burial chamber are
uncertain, and it is therefore excluded from the scheduling.
The surrounding protection fence, information boards and a footpath guide
post within the monument constraint area are excluded from the scheduling,
although the ground beneath these features is included.

Despite being disturbed and the loss of most of the covering mound, Arthur's
Stone chambered tomb is an impressive monument and a good example of a rare
class of site. It stands alongside a public road with correspondingly good
access and is therefore a valuable educational resource. Archaeological
material will survive in the remaining parts of the mound and environmental
evidence relating to the landscape in which the monument was built will
survive sealed beneath it. The monument is one of a small number of Neolithic
monuments in Hereford and Worcester and so it represents an important resource
for the study of this early period in this region.