A Scheduled Monument in Summertown, Oxfordshire 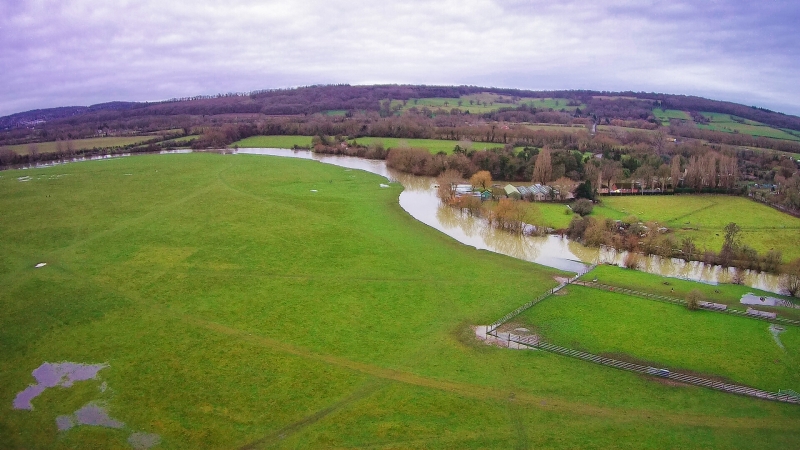 The monument comprises a number of archaeological items, mainly dating
to the later prehistoric period (2000-50BC). Although some of the items
are visible from the ground, the majority can only be seen from the air.
Indeed the range and number of items present on Port Meadow was not
fully realised until air photographs were first taken in 1933.
The archaeological items within Port Meadow may be described as
follows: 1) a late 17th century racecourse (SP492091); 2), 3) and 4)
circular ditched enclosures (SP495086, 497085, 497084); 5) a circular
ditched enclosure with a later Bronze Age burial mound (SP496084); 6) a
Bronze Age burial mound combined with two banked ditches (SP492089); 7)
a circular cropmark (SP491088); 8) a rectangular enclosure with ditches
(SP492088); 9) a group of enclosures of varying size (SP486089); 10) a
rectangular enclosure (SP489089); 11) a low mound probably representing
Iron Age habitation (SP492088); 12) a circular crop mark (SP488089); 13)
a circular ditch of late Bronze Age date overlapped by a similar ditch
of Iron Age date (SP492088); 14) a group of five small sub- rectangular
enclosures (SP492084); 15) a sub-rectangular enclosure containing what
might have been prehistoric fields (SP491089).
Excluded from the constraint area are the allotment gardens, as
presently defined, in the northern part of Port Meadow on Wolvercote
Common. The access trackway is also excluded but not the ground beneath
it.
From the SW corner of the monument, an area of riverbank running
northwards 100m long and 2m wide, which is used for mooring purposes, is
excluded from the scheduling. The ditches along the eastern boundary of
the site are also excluded from the scheduling as are the ditches to the
north of the monument, bordering Lower Wolvercote.

Port Meadow and Wolvercote Common contain evidence for consecutive
periods of human activity covering the Bronze Age and Iron Age. Well-
preserved sites of this type are rare in Britain especially where
evidence for habitation, burial and farming are found in association and
occasionally overlap.
Potential for the preservation of organic remains at this site is very
high. Early excavations yielded animal and bird bones while the survival
of pollen would allow reconstruction of the environment at the time of
later prehistoric settlement. This combined with the settlement evidence
will provide an unusually complete insight into later prehistoric.
occupation of the Thames valley.