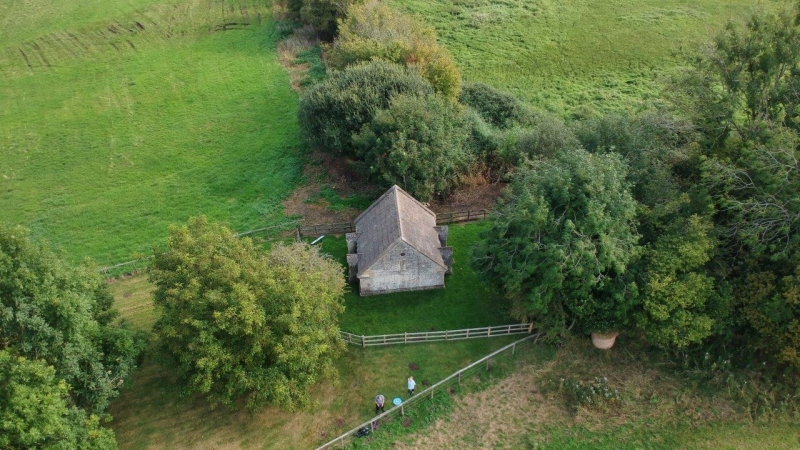 The monument includes a conduit house in the form of a single-storey stone
building situated on a hillside facing north east towards the City of Oxford.
The building contains a water tank and a well which provided water to the
Carfax Conduit in Oxford. This was part of a gravity fed system of clean water
provision built by Otho Nicholson between 1600 and 1610 AD.
The building itself faces north with its only door on this side. It measures
13m long and 8m wide and the walls stand up to about 4m high at the gable
ends. It has double loop windows at either end with two gabled buttresses on
each of its long sides. The building sits on a broad plinth with deep
foundations. There is the coat of arms of Otho Nicholson carved on the north
east end. The monument is also covered in numerous examples of graffiti from
the late 17th century through to the present day. The majority is well
chiselled 18th and 19th century work. The ditch and pipe which originally
carried water downhill to the north is no longer visible at ground level and
has been cut and removed at many points between North Hinksey and the original
location of the Carfax conduit house, the conduit house having been moved and
rebuilt in Nuneham Park.
The conduit house is a Grade II* Listed Building and is in the care of the
Secretary of State.

The North Hinksey conduit house is part of a system of water provision
intended by Otho Nicholson to provide clean drinking water to the City of
Oxford via the Carfax Conduit. Although most of the original system has since
been replaced or built over, and the Carfax conduit house has been rebuilt in
Nuneham Park, the system is a fine example of early civic clean water
provision (built 1610-1616 AD) and marks an important stage in the development
of the city.
The North Hinksey conduit house is the only visible element of this system,
situated in its original location. Despite part restoration of the roof,
the monument is largely original and includes archaeological evidence of its
construction and use.
The monument is in the care of the Secretary of State and can be viewed from
the outside by the public.