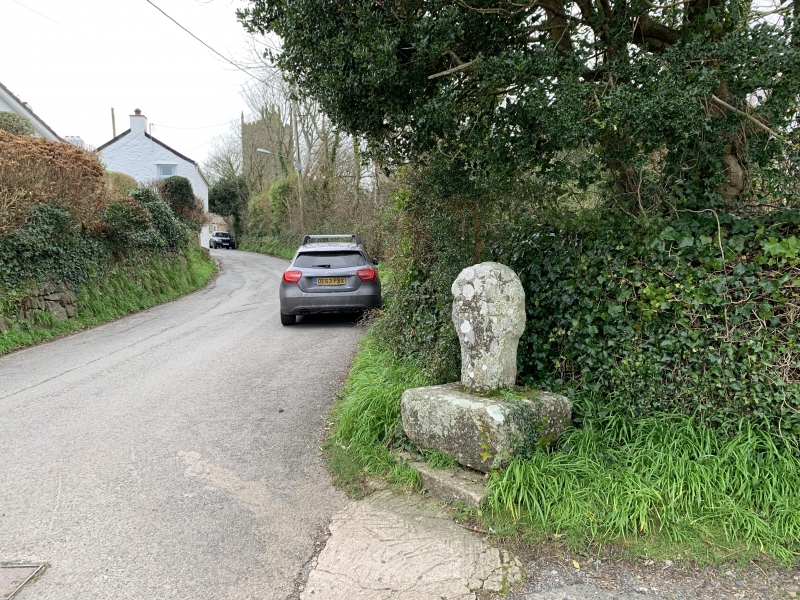 The monument includes a medieval wayside cross and a 2m protective margin
situated at the south-east edge of Paul beside the road to Mousehole on the
southern coast of Penwith in west Cornwall.
The wayside cross at Paul survives with an upright granite shaft and a round
or 'wheel' head set in a square base, measuring 1.35m in overall height. The
head is 0.54m in diameter and 0.19m thick. Each principal face of the head
bears a relief Latin cross measuring 0.73m high and 0.43m across the limbs.
The upper limbs have slightly splayed ends, while the lower limb gradually
tapers as it extends beyond the head down the centre of the shaft. The
rectangular-section shaft measures 0.38m high from the base to the neck and is
0.39m wide and 0.19m thick. The shaft is undecorated apart from the extended
lower limb of the head's relief cross forming a raised midline along most of
the shaft on each main face. The shaft is cemented into the centre of a large
square granite base stone with weathered, dressed faces and measuring 0.84m
long by 0.85m wide and 0.43m high. This base stone is located on two adjoining
granite slabs forming a plinth measuring 1.05m east-west by 1.19m north-south
and projecting up to 0.36m beyond the south face of the base stone. This
wayside cross and its base stone were discovered c.1878 buried in the
hedgebank almost opposite its present location on the road to Mousehole; such
deliberate slighting and burial next to their former locations affected a
number of wayside crosses during the Reformation (c.1540). By 1896, the cross
had been re-erected at its present site, close to its former location and
sharing the same relationship to the roads in the vicinity. It marks a minor
junction at the south-east edge of the village, on the important road linking
the village and its parish church with the harbour at Mousehole, also within
the parish, 0.75km to the south-east. The cross is sited on the junction of
the Mousehole road with an unmetalled track to the present vicarage in the
village.
The surfaces of the metalled road south of the cross and the unmetalled track
to the east, and the fire hydrant marker-post to the west of the cross are
excluded from the scheduling although the ground beneath these features is
included.

The wayside cross at Paul has survived well. It forms a good example of a
wheel-headed wayside cross, bearing a distinctive and unusual style of cross
head motif. Although slightly re-located from its burial site by its former
position, it remains as a marker on the same important route and way to the
church within the parish. As such a marker, this cross demonstrates well the
major function of wayside crosses and shows the longevity of many roads still
in use. The burial of this cross in the hedgebank until the later 19th century
and its subsequent restoration illustrates the changing attitudes to religion
that have prevailed since the Reformation and the impact of those changes on
the landscape.