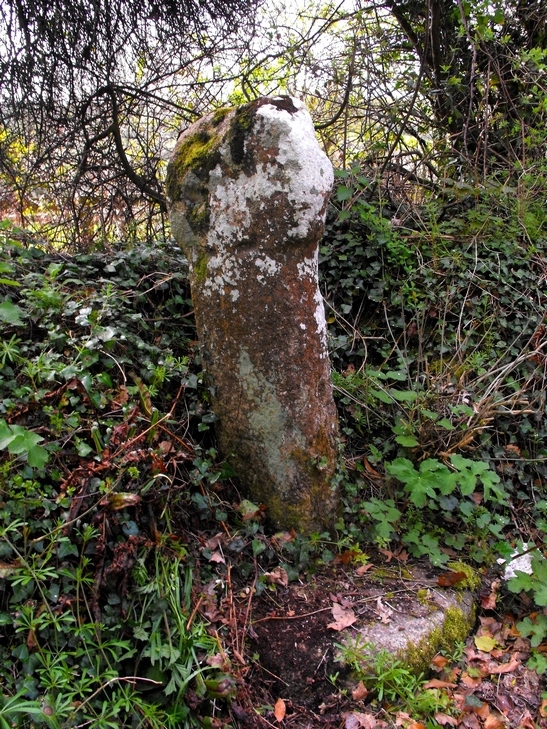 The monument includes a medieval wayside cross, known as the Trembath Cross,
and a surrounding 2m protective margin, beside the main road from Penzance to
Land's End, the modern A30, near Buryas Bridge in west Cornwall.
The Trembath Cross, which is Listed Grade II, survives with an upright granite
shaft and a round `wheel' head set in a large granite base, measuring 1.59m in
overall height. The head measures 0.39m high by 0.51m wide and 0.13m thick.
The head and upper shaft are decorated on each principal face.
The west face of the head bears an unusual cross motif, whose shaft is formed
by a vertical ridge, 0.06m wide, outlined by an incised line and with one pair
of side arms formed by opposed long triangular sinkings whose narrow tips meet
the central shaft. The motif is contained within a sub-circular incised line
which terminates on each side of the cross-motif's lower end. Below this
design, the upper shaft bears a second cross motif, a crude Latin cross, 0.32m
high, formed entirely by low ridges, 0.06m wide, emphasised by an incised line
as in the shaft of the motif above. The east principal face of the head and
upper shaft bears a design similar to the upper cross motif on the west face.
This cross design has the raised ridge and incised line forming the shaft,
which extends 0.2m onto the neck of the cross. The design also has the opposed
triangular sinkings forming the side arms of a cross, but it also has a second
pair of similar opposed triangular sinkings at the lower part of the shaft,
forming a double-armed cross.
The cross shaft is 0.99m high, 0.34m wide, tapering slightly to 0.32m at the
base where it enters the socket, and 0.17m thick. The shaft is set in a large
granite sub-circular base stone whose edges are largely obscured beneath
encroaching hedgebank debris and vegetation, its visible dimensions being
0.65m long by 0.65m wide and 0.21m deep. The full extent of the base stone was
described and depicted as circular, 1.2m in diameter and 0.25m high, by the
historian A G Langdon in 1896.
The Trembath Cross is situated beside the southern side of the modern A30,
which follows the course of one of the main early routes across the Penwith
peninsula from Penzance. Although the modern main road later veers west
towards Land's End, this sector forms part of the medieval route running
south west directly towards the important early medieval monastic centre of St
Buryan, a route marked at intervals by several surviving medieval wayside
crosses. The cross also marks the crossing point on that route of a track
running to the north within the parish to the church at Madron.
The surface of the modern metalled road north of the cross and the disused
milk churn collection support east of the cross are excluded from the
scheduling but the ground beneath is included.

This wayside cross has survived well and forms a good example of a wheel head
cross, complete with its original head, shaft and base. The designs on this
cross and their method of execution are most unusual. Earlier records confirm
that this cross has not been moved from its present location where it remains
one of several extant and broadly contemporary crosses marking this important
early route, demonstrating well the major role of wayside crosses, the
longevity of many routes still in use and the subsequent development of the
road network. This cross also marks one of several routes within this parish
to the church, showing one of the differing uses for wayside crosses.