A Scheduled Monument in Meavy, Devon 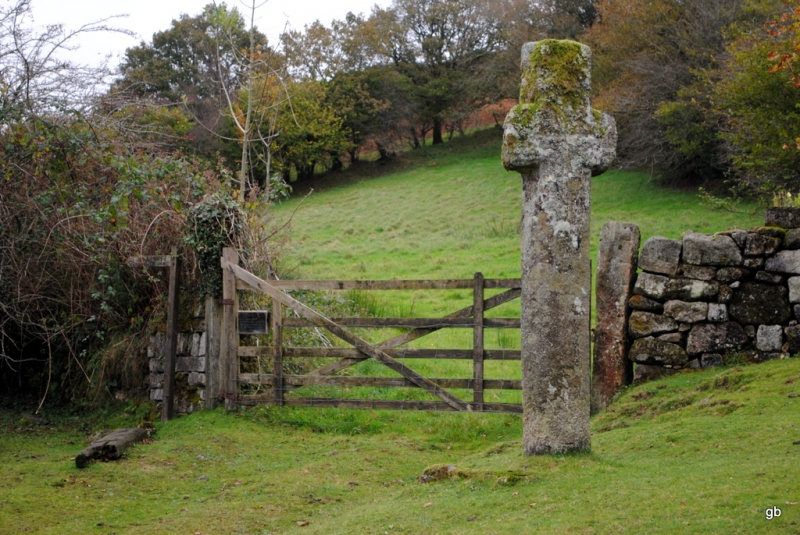 The monument includes a well preserved wayside cross of moderately
coarse-grained granite, set in a granite socket stone at the junction of a
minor public road with the lane to Yeo Farm. Both these routes were important
in medieval times.
The cross was formed from a single piece of stone which is rectangular in
section, measuring 0.34m by 0.26m, and has slightly chamfered edges 0.05m
wide. The arms of the cross are aligned nearly north-south. The height of the
shaft above the socket is 2.33m. The total width of the arms is 0.69m, and
their total depth is 0.34m. The head extends above the arms 0.35m. There is an
incised cross on each face between the arms, that on the west face measures
0.68m by 0.36m (the width of the incision is 0.02m-0.04m and it has a maximum
depth of 0.005m) and that on the east face measures 0.7m by 0.36m (0.03m-
0.04m wide by 0.01m maximum depth). Visible edges of the socket stone measure
1.2m by 0.9m.
There is some slight damage on the south east corner of the shaft 1.15m above
the base, on the east side of the north arm, and the bottom corner of the
south arm. The shaft of the cross was broken at the base in 1937, and
again in 1984 when there was also a break diagonally across the arms. This
damage (caused by runaway vehicles) has been well repaired, though the stump
of the cross which was moved to the churchyard at Meavy in 1937 has since been
lost. The cross is Listed Grade II. There is an OS bench mark at the base of
the west face of the shaft.

Dartmoor is the largest expanse of open moorland in southern Britain and,
because of exceptional conditions of preservation, it is also one of the most
complete examples of an upland relict landscape in the whole country. The
great wealth and diversity of archaeological remains provides direct evidence
for human exploitation of the Moor from the early prehistoric period onwards.
The well preserved and often visible relationship between settlement sites,
land boundaries, trackways, ceremonial and funerary monuments as well as later
industrial remains, gives significant insights into successive changes in the
pattern of land use through time.
Wayside crosses are one of several types of Christian cross erected during the
medieval period, mostly from the 9th to 15th centuries AD. In addition to
serving the function of reiterating and reinforcing the Christian faith
amongst those who passed the cross and of reassuring the traveller, wayside
crosses often fulfilled a role as waymarkers, especially in difficult and
otherwise unmarked terrain. The crosses might be on regularly used routes
linking settlements, or on routes which might have a more specifically
religious function, including those providing access to religious sites for
parishioners and funeral processions, or marking long distance routes
frequented on pilgrimages.
Over 110 examples of wayside crosses are known on Dartmoor, where they form
the commonest type of stone cross. Almost all of the wayside crosses on the
Moor take the form of a `Latin' cross, in which the cross-head itself is
shaped within the projecting arms of an unenclosed cross.
Wayside crosses contribute significantly to our understanding of medieval
routeways, settlement patterns and the development of sculptural traditions.
All wayside crosses on the Moor which survive as earth-fast monuments, except
those which are extremely damaged and removed from their original locations,
are considered worthy of protection.

Marchant's Cross is one of the largest surviving wayside crosses in the
Dartmoor region. Despite twice being damaged this century, it has been well
repaired and remains well preserved. Although there is no absolute proof that
this is the cross recorded as `Smalacumbacrosse' in the late 13th century it
is a likely candidate, and certainly existed at the time the record was made.
There is every reason to believe that the cross is sited in its original
position at the junction of what, in medieval times, were important routes.
Published photographs survive of the cross from 1890 onwards.