A Scheduled Monument in Bishopton, Darlington 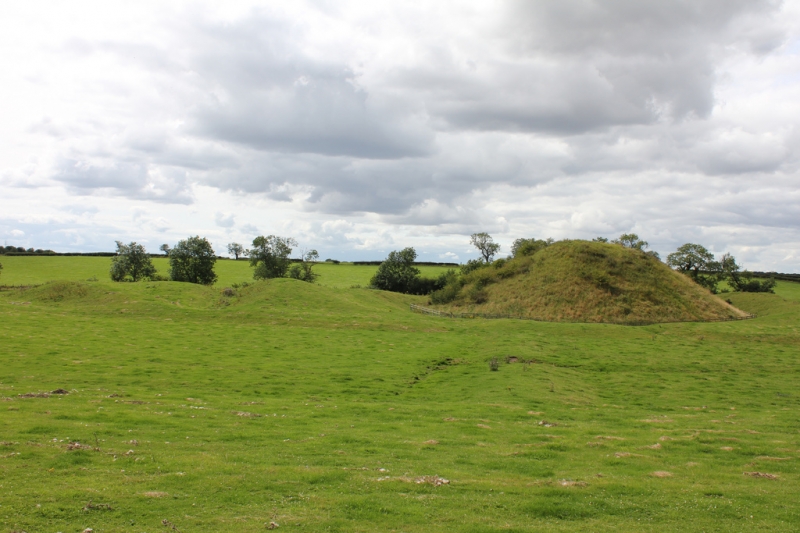 The monument includes an exceptionally well preserved Norman motte and bailey
castle situated on low lying land beside the Bishopton Beck. The motte is
conical in shape with a near circular top; it stands to a height of 11.5m and
measures 55m across at the base and is surrounded by a moat 10 to 15m wide and
1.4 to 3.5m deep. Immediately to the north west of the motte there is a
bailey which measures 80m north east to south west by 40m north west to south
east.
Its north west side is bounded by a ditch 16m across and 2.7m deep, its
north east side by a bank 0.4m wide and 0.4m high and its south west side is
bounded by a trivallate earthwork 25m across. The western boundary of the
site consists of a double ditch system which runs parallel with the
Bishopton Beck. Within the eastern part of the bailey there are the remains
of a rectangular building measuring 28m by 9.5m, and the remains of a second
building abutting the northern wall of the bailey. The motte and the bailey
is surrounded on the east by a substantial moat, crossed by two raised
causeways 1.3m high; the moat is up to 70m wide and is 1.5m deep and was fed
with water, by a series of artificial channels, from the Bishopton Beck.
Little is known of the history of the monument but a reference in AD 1143
referring to the fortification of a castle by Roger Conyers may refer to
Bishopton. It is not known if there was a previous castle on the site.
The telegraph poles which cross the site are excluded from the scheduling,
although the ground beneath them is included.

The motte and bailey castle at Bishopton survives in an exceptional state of
preservation. Additionally, it is a complex monument which retains valuable
information about its origin and development. It will greatly add to our
knowledge and understanding of the Norman Conquest of northern Britain.