A Scheduled Monument in Grindon, Stockton-on-Tees 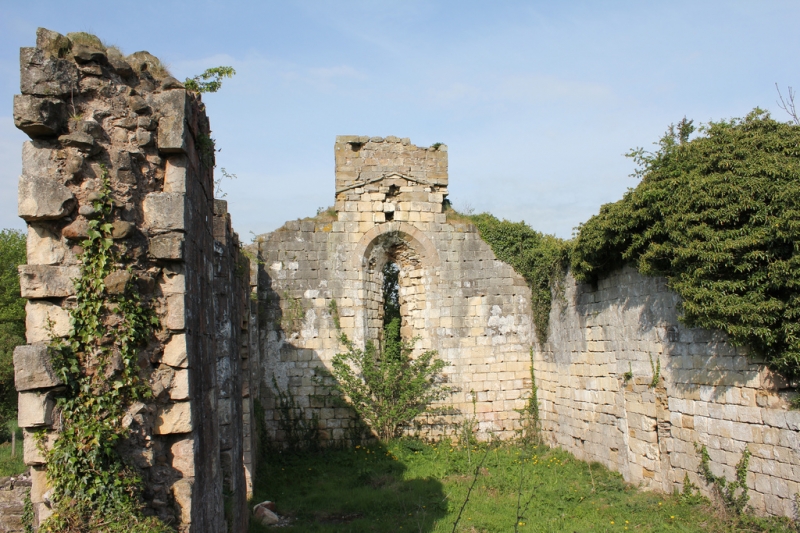 The monument includes the remains of a church and associated graveyard,
situated within the small settlement at Grindon.
The church at Grindon was originally built during the 12th century and
substantially rebuilt by Bishop Pudsey in 1190. It was dedicated to St Thomas
a Becket who was canonized in 1172. The visible remains include parts of the
nave, chancel and south chapel. The nave is rectangular and 15m east to west
by 6.5m north to south within walls of limestone blocks on average 1m thick.
The north and south walls stand to a maximum height of 5m and the west gable
stands to its full height of 7.2m. The main doorway into the church is visible
in the western end of the south wall of the nave. The doorway is a
particularly fine example, with a semi-circular arch supported on columns. A
second doorway of square-headed form in the north wall of the nave has been
blocked. There are two original lancet windows in the south wall and a single
lancet window in the north wall of the nave. There is a later window at the
eastern end of the south wall. A large window, the remains of which include
part of the sill and one jamb, are visible at the eastern end of the north
wall. There is a single lancet window, centrally placed in the western gable,
and the remains of a bellcote.
The remains of the chancel survive to the east end of the nave and are
considered to be slightly earlier in date. The chancel is visible as the lower
courses of walls of rubble masonry, except the north wall which stands to 2.2m
high and retains the sill of a window. The church was altered during the 14th
century when a chapel, known as the Fulthorpe porch, was added to the south
side of the chancel. The chapel, rectangular in shape, measures 5m by 3.4m
within walls which stand up to 2.2m high. It has the remains of windows in the
west and south walls, and parts of a piscina with a broken bowl lie adjacent
to the eastern side of the south window. During the late 18th century the
church was extensively repaired. At this time, the small porch around the
south doorway was constructed; this is visible as rubble walls standing to a
maximum height of 1.1m. The lead roof was replaced with slate, parts of the
chancel were refaced in brick and the interior of the nave was panelled with
wood; the holes facilitating the wooden panelling are clearly visible. In
addition to these alterations, a brick fireplace was inserted in the south
wall of the nave in order to heat the `Wynyard Pew'.
The church, which is Listed Grade I, remained in use until 1848 when it was
abandoned and superseded by the opening of the church of the Holy Trinity
at Thorpe Thewles. Surrounding the church on all sides there are the remains
of an associated graveyard 70m east to west by 55m north to south within a
broad bank up to 1.5m high and spread to 5m. The graveyard remained in use
until the church was abandoned. Vegetation cover has obscured the graves and
their headstones with the exception of a large slab immediately outside the
west end of the church. Until at least 1928 a stone coffin and a medieval
grave slab, the latter engraved with the name `Roger de Fulthorpe,' were
visible in the churchyard to the south east of the church. It is thought that
the latter had originally been placed in the `Fulthorpe Chapel'.
All fences which cross the monument and the wooden stile are excluded from the
scheduling, although the ground beneath these features is included.

Despite some structural instability, St Thomas a Becket's Church survives
reasonably well. Important parts of the original medieval church remain intact
and it retains architectural features considered to be of high architectural
merit. Taken together with the remains of its graveyard, it will contribute to
our knowledge and understanding of medieval life and society.