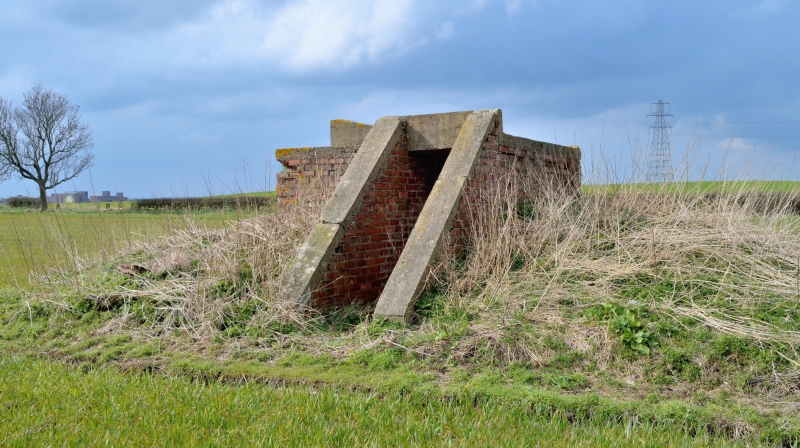 The monument includes the standing remains of a control shelter for a
World War II bombing decoy site and the base of an associated structure.
It is located on slightly undulating ground approximately 3.5km north east
of the centre of Darlington. The primary purpose of the decoy was to
divert enemy bombers from attacking the important industrial and transport
centre at Darlington. This was done by lighting fires to replicate
successful bomb damage: a type of decoy site code-named special fire or
Starfish. A variety of types of fire were used and these were ignited
electronically from a remote control shelter. The decoy site was located
to the north east of the city on the anticipated line of approach of enemy
aircraft heading inland from raids over Middlesbrough and Stockton on
Tees. The monument was part of two decoys protecting Darlington, the other
being located at Eryholme, approximately 9km to the south east of the
city. No significant remains of this other decoy survives. The decoys were
part of a wider network of defensive measures and would have been part of
the deception strategy for other targets such as the industrial centre of
Middlesbrough and the nearby airfield of Middleton St George.
The site, which was known as Darlington 48A, Great Burdon, was under the
direct control of No.80 Wing RAF which coordinated the sophisticated
communications network established to monitor the movements of enemy
aircraft and alert the personnel at the relevant site. The day to day
operation of the site was maintained by RAF Middleton St George. The
personnel staffing the site comprised one sergeant, two corporals and
eleven airmen all of whom were billeted nearby. The decoy site included a
control building, a Nissen hut and a guard house. The control building and
footings for the Nissen hut still survive although the location of the
guard house and the actual decoy fires and their safety enclosures is
currently unknown.
The first currently known reference to the site is dated 1 August 1941 and
the last 8 April 1943. The surviving control shelter follows the standard
Air Ministry design for Starfish sites (CT 557/41). The shelter is a brick
walled rectangular structure with a reinforced concrete roof, standing on
a concrete base. It measures 3.75m north to south by 3.10m east to west
and stands up to 1m above the surrounding earth mound. There is an
entrance passage 1.5m wide and 3m in length extending east from the north
eastern angle. The standard design included a blast wall in front of the
entrance passage, however this does not survive as an upstanding feature
at this site. There is an emergency exit/observation hatch in the roof and
the voids for the ventilation ducts can still be seen. The whole shelter
was originally covered by a protective mound of earth. The top 1m of this
has eroded away leaving a mound 1m high and 4m wide encircling the
structure. Remains of the ducts which ventilated the shelter and the
ignition cables will survive within the mound. The control building housed
the electronic ignition gear, offered protection to the operating crew and
provided communication, through a telephone line.
Located 6m to the north of the shelter is a concrete plinth measuring 7m
north to south by 4m east to west. This was the base for the Nissen hut,
which would have been used for storage and accommodation for the duty
crew. The monument includes a margin of 2m around the surviving remains
for their support and preservation.
The water trough standing on the concrete base and the associated pipe
work is excluded from the monument, although the ground beneath these
features is included.

World War II saw the emergence of aerial bombardment as a decisive instrument
of warfare, and to counter this threat, the United Kingdom maintained a
flexible and diverse mechanism of air defence throughout the war. This
included the early warning of approaching aircraft, through radar and visual
detection, and the local defence of towns, cities and other vulnerable points
using anti-aircraft gunnery and balloon barrages. But less conspicuously, many
potential targets were shadowed by decoys - dummy structures, lighting
displays and fires - designed to draw enemy bombs from the intended points of
attack.
Britain's decoy programme began in January 1940 and developed into a complex
deception strategy, using four main methods: day and night dummy aerodromes
(`K' and `Q' sites); diversionary fires (`QF' sites and `Starfish'); simulated
urban lighting (`QL' sites); and dummy factories and buildings. In all, some
839 decoys are recorded for England in official records, built on 602 sites
(some sites containing decoys of more than one type). This makes up the
greater proportion of the c.1000 decoys recorded for the United Kingdom.
The programme represented a large investment of time and resources. Apart from
construction costs, several thousand men were employed in operating decoys,
the fortunes of which were closely tied to the wartime targets they served.
The decoys were often successful, drawing many attacks otherwise destined for
towns, cities and aerodromes. They saved many lives.
Urban decoy fires were known as `SF', `Special Fires' and `Starfish', to
distinguish them from the smaller `QF' installations. Each town was protected
by a cluster of these decoys, the most technically sophisticated of all the
types, with each Starfish replicating the fire effects an enemy aircrew would
expect to see when their target had been successfully set alight. The decoys
included variation in fire type, duration of burning and speed of ignition. In
a permanent Starfish all fire types were used, set in discrete areas defined
by firebreak trenches and controlled from a remote shelter. The whole array
was linked by a network of metalled access roads. `Temporary Starfish' (all
built in 1942 to counter the threat from the so-called Baedeker raids against
historic towns and cities) only had basket fires. In all, 228 decoys with a
Starfish component are recorded in England, 37 of which were `Temporary
Starfish', and the rest `Permanent'. The Permanent sites were located mostly
in central England, close to the urban and industrial targets they were
intended to protect; temporary sites, like the Baedeker targets they were
protecting, were confined to southern and eastern England.
QF sites were first provided for the night protection of RAF airfields, but
from August 1941 their role was extended to protect urban centres. Although
similar to Starfish, they differed in being considerably smaller, using a
limited range of fire types and being sited for the local protection of
specific vulnerable points rather than whole cities or conurbations. These new
QF sites of 1941-2 fell into four groups, for the protection of: urban and
industrial targets (the `Civil Series', located mostly in the west Midlands,
north-west and in the Middlesbrough area); Royal Navy sites (these were few in
number and sited to protect coastal bases); Army sites, to protect ordnance
factories or military installations (these existed in a sparse belt running
from central southern England into the west Midlands); and oil installations
and tank farms (the `Oil QF' sites). In all, only about 100 QF sites were
operational in England.
Very little now survives of any of these decoys, most having been cleared
after the war. All sites with significant surviving remains will be considered
of national importance, as will those where a well-preserved night shelter
has been identified.

The control shelter at Great Burdon survives well and significant
information about the function and technology of the Starfish site and its
role in the wider decoy system in the North East of England will be
preserved.