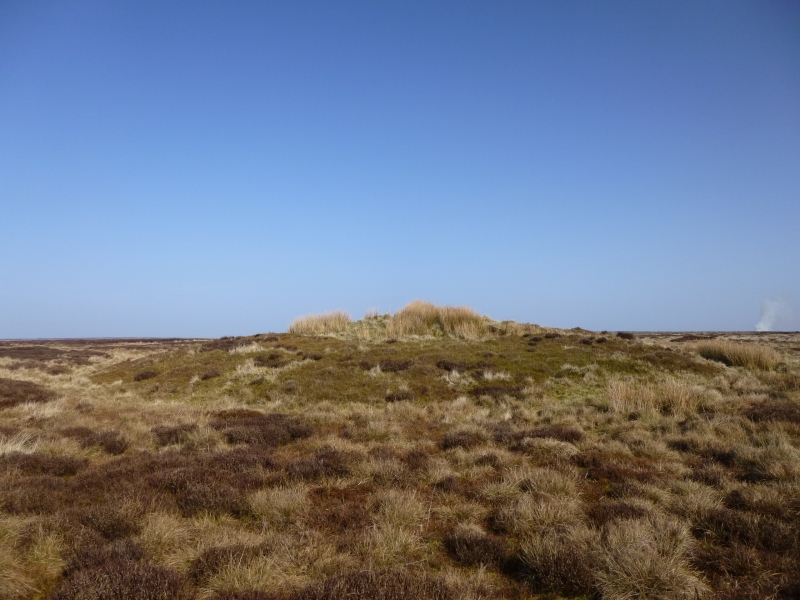 The monument includes two round barrows 70m apart orientated east-west and a
further smaller barrow 30m to the south, situated in a prominent position on
the west edge of the Hambleton Hills overlooking the Vale of the Ure. They lie
in close proximity to a series of prehistoric linear earthworks in this area.
Two of the barrows remain as clearly visible earthworks. Only a slight
depression indicating the position of the ditch around the third barrow
survives.
The western barrow has a well defined flat topped earth and stone mound
standing 0.9m high. It is round in shape and is 10.7m in diameter. This mound
has been dug into in the past leaving a slight hollow. This mound is
surrounded by a ditch up to 3m wide which has become partially filled in over
the years and is visible as a slight hollow 0.1m-0.2m deep.
The eastern barrow has a large well defined flat topped mound standing 2.2m
high. It is round in shape and is 23m in diameter. An excavation by Canon
Greenwell in 1877 found two cremations, one within an urn, and various flint
artefacts. Also uncovered was a platform of birch branches beneath the mound.
This has left an exposed trench on the north western flank. The mound is
encircled by a ditch 2.5m wide and 0.45m deep.
The third barrow lies 28m south of the eastern barrow. A shallow ditch 0.3m
wide encloses an area 6m across. Usually a barrow mound would be enclosed
within the ditch; in this instance the nature of the mound, if it existed, is
uncertain. One interpretation is that burials were placed in the ground within
the ditch without being significantly marked above ground.
This monument is one of many similar examples on this area of the Hambleton
Hills. Many of these lie in closely associated groups, particulary along the
watersheds. They provide evidence of territorial organisation marking
divisions of land, divisions which still remain as some parish or township
boundaries.

Despite limited disturbance two of the barrows have survived well. The third
barrow is only just visible as a shallow ditch. Significant information about
the original form, burials placed within both mound and ditch, and evidence of
earlier land use beneath the mounds will be preserved. They are part of a
group of barrows clustered on this part of the Hambleton Hills thought to mark
a prehistoric boundary. They are associated with later prehistoric linear
eathworks. Similar groups of monuments are also known across the north and
central areas of the North York Moors providing important insight into burial
practice. Such groupings of monuments offer important scope for the study of
the division of land for social, ritual and agricultural purposes in different
geographical areas during the prehistoric period.

Books and journals
Spratt, D A , 'Prehistoric and Roman Archaeology in North East Yorkshire' in Prehistoric and Roman Archaeology of North East Yorkshire, , Vol. BAR 104, (1993)
Other
Kinnes, IA and Longworth, IH, Catalogue of the excavated material in the Greenwell collection, Catalogue of Excavated Material in the Greenwell Collection, (1985)
Pacitto, A L, F M Warden memo, (1982)