A Scheduled Monument in Elton, Derbyshire 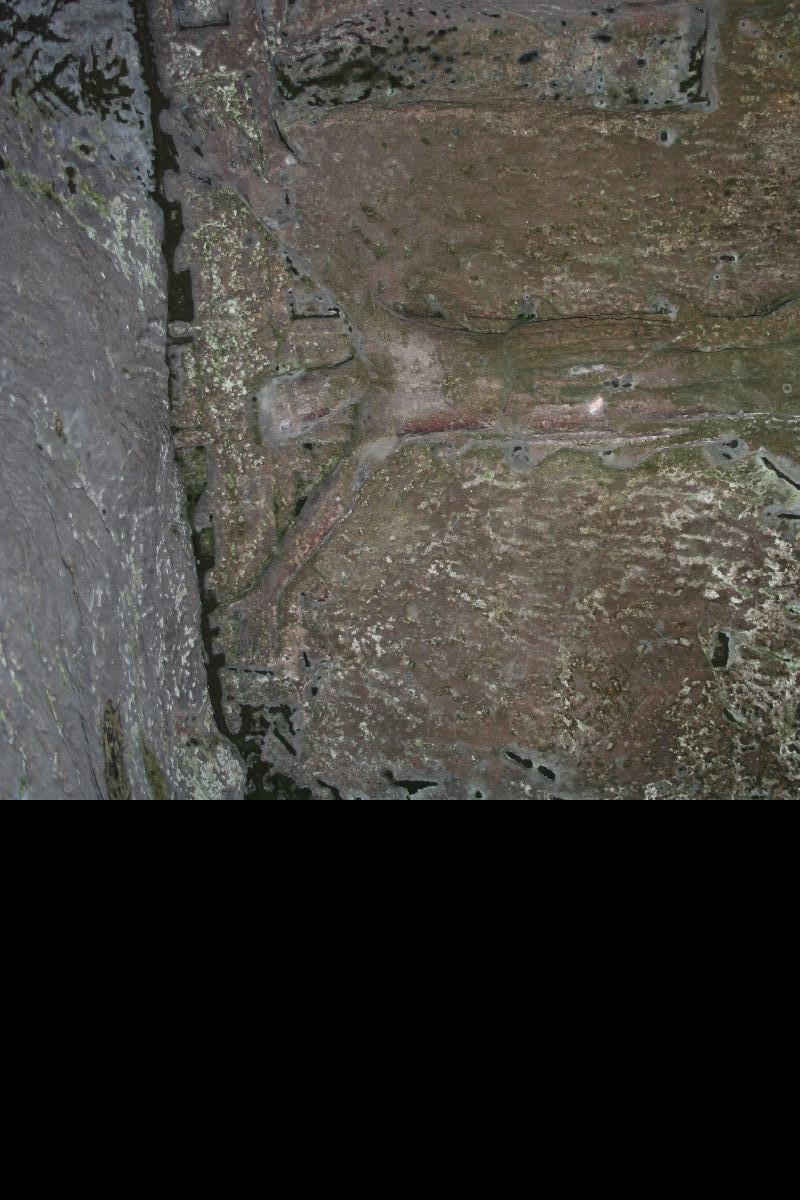 Cratcliff Rocks is an extensive outcrop on the edge of Harthill Moor in the
eastern gritstone moors of Derbyshire. The monument is a medieval cave
hermitage and includes the rock shelter, the rock face outside the shelter on
which survive a number of architectural features associated with ancillary
structures and buildings, and the area in front of the rock face in which are
preserved the buried remains of these ancillary features. This area measures
18m from east to west and extends for c.17m from the back of the cave to the
edge of the drop down into Cratcliff Wood.
The origins of the hermitage are not documented but a bas-relief crucifix
carved inside the rock shelter has been dated stylistically to the 13th or
14th century. It is accompanied by a number of chiselled recesses which would
have been used for candles and sacred vessels. Outside the shelter, on the
rock face above and to either side, are a number of chiselled grooves and
sockets for timber beams which indicate that a roof or awning formerly
projected outward from the rock to cover the rock shelter and create an annexe
to the south. East of this is another groove, cut in an inverted V, which has
beam sockets at each angle and indicates that a building with a steeply
pitched roof also projected at right-angles to the rock face. The latter
building, which was c.3.5m high and 2m wide, is interpreted as the living
quarters of the hermit while the rock shelter, and the area under the awning,
was the chapel. The railings and modern wall in front of the rock shelter are
excluded from the scheduling though the ground underneath is included.

From the time of St Augustine's mission to re-establish Christianity in AD
597, monasticism formed an important facet of both religious and secular life
in the British Isles. By the 12th century, as a reaction against the
corruption and excesses that characterised established orders, many reformed
orders were emerging in France and establishing themselves in England having
adopted a revised Rule which included increased simplicity of life and
seclusion from the outside world. However, in preference to living in
settlements of religious communities, some men and women chose to live
solitary lives of contemplation and simplified religious observance akin to
those of the Christian Fathers and early British saints. These anchorites and
hermits lived off alms or, in the case of hermits, who, unlike anchorites,
were allowed to leave their cells, were often supported by the patronage of
the nobility who established hermitages on their estates and appointed hermits
to pray for the souls and well-being of their families. Hermitages fell out of
favour with the general dissolution of religious establishments in the first
half of the 16th century. Cratcliff Rocks hermitage is unusual in that it
remained in use until at least 1550, when the accounts of the steward of
Haddon Hall note the delivery of five brace of coneys to the hermit. Although
not an elaborate cave hermitage, it is well-preserved and includes important
architectural evidence of further structures whose buried remains are
preserved in the area in front of the cave entrance.