A Scheduled Monument in Middleton, Cumbria 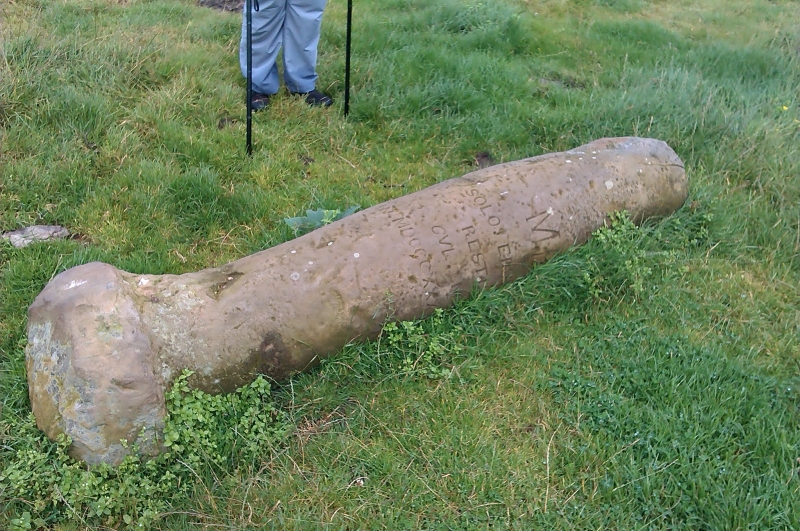 This record was the subject of a minor enhancement on 23 March 2016. This record has been generated from an "old county number" (OCN) scheduling record. These are monuments that were not reviewed under the Monuments Protection Programme and are some of our oldest designation records.

The monument includes the remains of a milestone of Roman date, situated close to the former route of the Roman road from Ribchester to Low Borrow Bridge. The milestone is cylindrical with a diameter of 0.45m and a height of 1.7m. The stone bears the inscription ‘M.P.L.III’ with a second inscription that records it re-erection in 1836 after the stone was found buried. The milestone is a Listed Building Grade II*.

Roman milestones were generally stone pillars with Latin inscriptions set up when a road was first constructed or when it was repaired. The inscriptions usually give the distance to the next, named, town. They also give the name of the reigning emperor and the particular year of his reign in which the milestone was erected, thus allowing milestones to be accurately dated. Later emperors were often commemorated by a second inscription added to the existing milestone, or by a milestone set up nearby. Later examples from the 3rd and 4th centuries AD seem to have been erected for propaganda purposes and they usually give only the emperor's name and titles. Although the Roman road network was extensive in England, serving both military and economic needs, and although many survive in museums, milestones in their original locations are comparatively rare, with only around fifty examples recorded. As a rare monument class, all surviving examples will be considered to be of national importance.

The Roman Milestone 345m north east of Abba Farm is reasonably well-preserved and is representative of its period. The monument provides insight into the Roman road system and its importance both militarily and economically.