A Scheduled Monument in Alnham, Northumberland 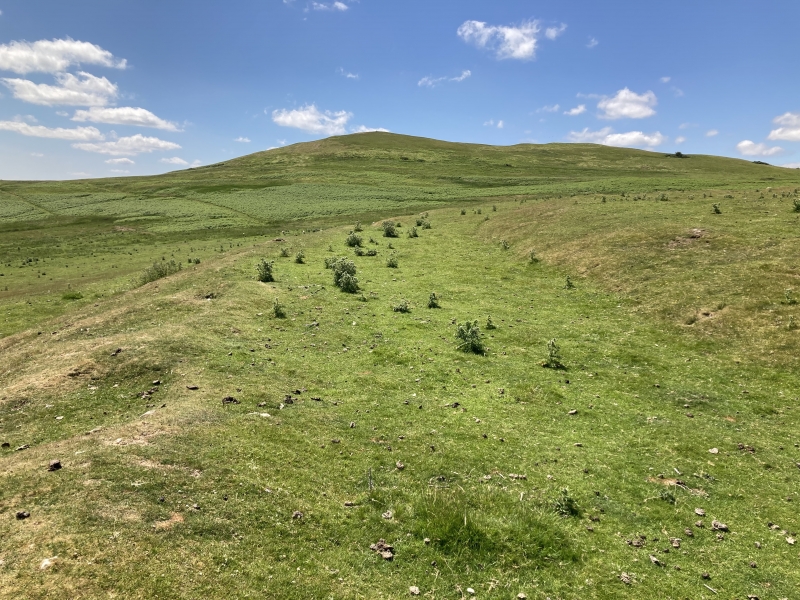 This record was the subject of a minor enhancement on 17 May 2016. This record has been generated from an "old county number" (OCN) scheduling record. These are monuments that were not reviewed under the Monuments Protection Programme and are some of our oldest designation records.

The monument includes a small enclosed settlement of Romano-British date, situated on the lower south west slopes of Old Fawdon Hill. The enclosure measures approximately 22m south west-north east and 24m south east-north west. It is surrounded by an intermittent sub-oval earth and stone bank varying in height from 0.3m to 0.8m and spread up to 5m in width. The north edge of the enclosure is a natural south facing scarp 0.3m high. The rampart has been partially slighted by ridge-and-furrow. Within the interior there is a sub-rectangular platform measuring 8m by 6m, which is understood to be the remains of a house platform. The form of the earthworks indicates it to be a Romano-British settlement enclosure.

In Cumbria and Northumberland several distinctive types of native settlements dating to the Roman period have been identified. The majority were small, non- defensive, enclosed homesteads or farms. In many areas they were of stone construction, although in the coastal lowlands timber-built variants were also common. Frequently the enclosures reveal a regularity and similarity of internal layout. The standard layout included one or more stone round-houses situated towards the rear of the enclosure, facing the single entranceway. In front of the houses were pathways and small enclosed yards. Homesteads normally had only one or two houses, but larger enclosures could contain as many as six. At some sites the settlement appears to have grown, often with houses spilling out of the main enclosure and clustered around it. At these sites up to 30 houses may be found. In the Cumbrian uplands the settlements were of less regimented form and unenclosed clusters of houses of broadly contemporary date are also known. These homesteads were being constructed and used by non-Roman natives throughout the period of the Roman occupation. Their origins lie in settlement forms developed before the arrival of the Romans. These homesteads are common throughout the uplands where they frequently survive as well-preserved earthworks. In lowland coastal areas they were also originally common, although there they can frequently only be located through aerial photography. All homestead sites which survive substantially intact will normally be identified as nationally important.

The enclosed settlement south west of Old Fawdon Hill is an example of an important regional monument type. The form and character of native settlement north of Hadrian’s Wall is of particular importance in informing us of the reaction of the indigenous population to the Roman occupation of Britain. The value of the monument is increased by its proximity to a number of Iron Age and Romano-British monuments with Old Fawdon Hill prehistoric defended settlement lying uphill to the north east, Chubden prehistoric defended settlement to the ESE and the prehistoric landscape of Ingram Farm to the north west.