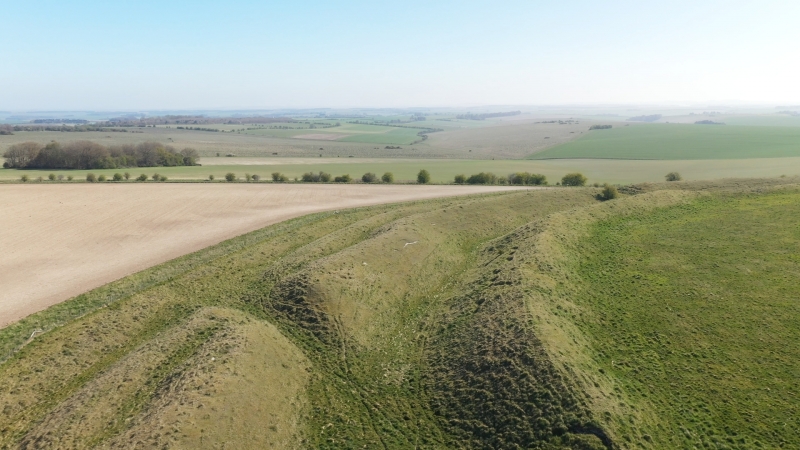 This record was the subject of a minor enhancement on 25 June 2015. This record has been generated from an "old county number" (OCN) scheduling record. These are monuments that were not reviewed under the Monuments Protection Programme and are some of our oldest designation records. As such they do not yet have the full descriptions of their modernised counterparts available. Please contact us if you would like further information.

This monument includes a large multivallate hillfort with outworks and an annexe situated on the summit of a prominent hill overlooking two dry valleys and the distant River Wylye. The hillfort survives as an oval enclosure defined by triple closely spaced concentric ramparts with ditches, a western triangular annexe and a complex eastern entrance with outworks which surround an earlier smaller but similarly shaped enclosure which survives mainly as a ditched feature. The earliest feature is the innermost enclosure defined by a ditch which covers approximately 4.3ha and measures 246m long by 230m wide. Excavations by Cunnington in 1932 showed it to have a complex funnelled entrance protected by gates and a flint wall and revealed the ditch was originally backed by a timber revetted rampart. The outer enclosure measures approximately 345m long by 352m wide internally and is defined by three strong earthwork banks standing up to 3.5m high with ditches of up to 1.7m deep, which have a combined width of 74m and behind which on the interior throughout the circuit are a series of quarry scoops. In total the internal area is approximately 9.7ha. To the east is a complex entrance with an inturned passage way up to 28m long protected by a further strong defensive bank and ditch. To the west is a roughly triangular annexe defined by a bank and ditch which measures 141m long by 73m wide internally and is thought to be a Romano-British stock enclosure. Over 130 structures have been identified within the hillfort many survive as circular hollows between 7m and 15m in diameter and up to 1m deep, but there are also compounds, yards and some structures apparently have footings or foundations. Many overlap which indicates a complex development and long period of occupation. In the south eastern quadrant the rectangular structures including sixteen low mounds in two blocks of eight which cover an area measuring approximately 120m by 90m mark the site of the 19th century Winterbourne Stoke biannual Sheep Fair which continued until 1916. A series of stones which cross the hillfort also mark the parish boundary between Steeple Langford and Berwick St James. The excavations in 1932 produced pottery dating from the Early Iron Age to the Romano-British period and included some Samian. This indicated the inner enclosure dated to 300 BC and the outer enclosure to 100 BC. They also produced three inhumations of Late Iron Age or Romano-British date and the bodies of nine infants were found within the inner ditch silts. A field survey was carried out in 1986 and a geophysical survey in 1987.

Large multivallate hillforts are defined as fortified enclosures of between 5ha and 85ha in area, located on hills and defined by two or more lines of concentric earthworks set at intervals of up to 15m. They date to the Iron Age period, most having been constructed and used between the sixth century BC and the mid-first century AD. They are generally regarded as centres of permanent occupation, defended in response to increasing warfare, a reflection of the power struggle between competing elites. Earthworks usually consist of a rampart and ditch, although some only have ramparts. Access to the interior is generally provided by two entrances although examples with one and more than two have been noted. These may comprise a single gap in the rampart, inturned or offset ramparts, oblique approaches, guardrooms or outworks. Internal features generally include evidence for intensive occupation, often in the form of oval or circular houses. These display variations in size and are often clustered, for example, along streets. Four- and six-post structures, interpreted as raised granaries, also occur widely while a few sites appear to contain evidence for temples. Other features associated with settlement include platforms, paved areas, pits, gullies, fence lines, hearths and ovens. Additional evidence, in the form of artefacts, suggests that industrial activity such as bronze- and iron-working as well as pottery manufacture occurred on many sites. Large multivallate hillforts are rare with around 50 examples recorded nationally. These occur mostly in two concentrations, in Wessex and the Welsh Marches, although scattered examples occur elsewhere. They are rare and important for understanding the nature of social organisation within the Iron Age period. Despite some erosion and burrowing animals the large multivallate hillfort with outworks called Yarnbury Castle survives very well and will contain further archaeological and environmental evidence relating to its construction, development, longevity, territorial, social, economic and strategic significance, trade, agricultural practices, social organisation, domestic arrangements, subsequent adaptive re-use and overall landscape context.