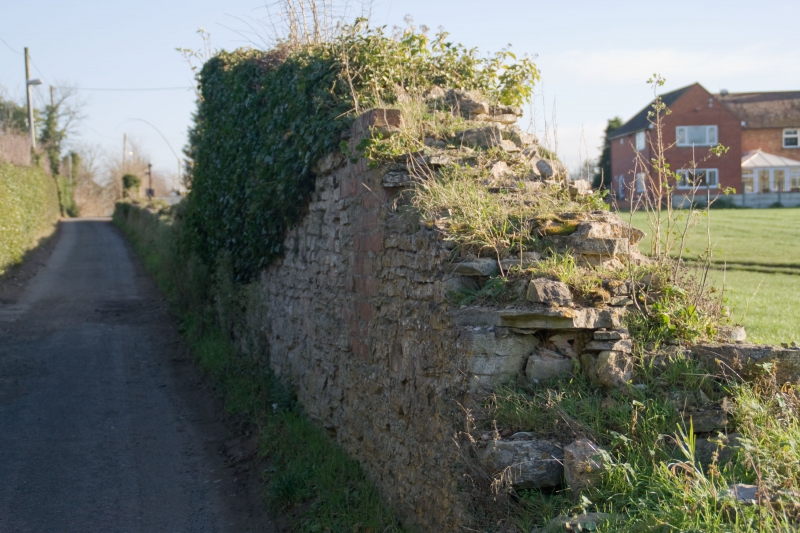 This record was the subject of a minor enhancement on 21 May 2015. This record has been generated from an "old county number" (OCN) scheduling record. These are monuments that were not reviewed under the Monuments Protection Programme and are some of our oldest designation records. As such they do not yet have the full descriptions of their modernised counterparts available. Please contact us if you would like further information.

This monument includes a length of Evesham Abbey precinct wall known as Abbot Chyryton’s Wall situated on the south side of Boat Lane close to the eastern side of the River Avon. The monument survives as the standing and partially buried remains of a length of precinct wall, constructed from stone rubble with some later brick and concrete. The length of wall surviving within the monument is approximately 262m long, orientated east to west with a slight curve at the west and a gap of approximately 8m in the centre. It is up to 2m high and 0.75m thick with a concrete cap.

From its foundation in 701, Evesham Abbey alternated between monastic and collegiate foundation, finally becoming a Benedictine Abbey in 989 that lasted until its dissolution in 1539. The wall was constructed by Abbot William de Chryrton between 1317 and 1344.

Early monasteries were built to house communities of monks or nuns; sometimes houses were `mixed' and included both sexes. The main buildings provided facilities for worship, accommodation and subsistence. They included a series of timber halls and perhaps a stone church, all located within some form of enclosure. Benedictine monasticism had its roots in the rule written about AD 530 by St Benedict of Nursia for his own abbey at Monte Cassino. Benedict had not intended to establish an order of monasteries and wider adoption of his rule came only gradually. The first real attempt to form a Benedictine order came only in 1216. The Benedictine monks, who wore dark robes, came to be known as `black monks'. These dark robes distinguished them from Cistercian monks who became known as `white monks' on account of their light coloured robes. Over 150 Benedictine monasteries were founded in England. As members of a highly successful order many Benedictine houses became extremely wealthy and influential. Their wealth can frequently be seen in the scale and flamboyance of their buildings. Benedictine monasteries made a major contribution to many facets of medieval life and all examples exhibiting significant surviving archaeological remains are worthy of protection. Despite partial destruction, renovation and invasive vegetation, Abbot Chyryton’s wall survives reasonably well and forms an integral part of a nationally important abbey. Elements of the original structure will remain concealed behind later renovations and repairs and will provide important information on its construction.

Books and journals
Pevsner, N, Brooks, A, The Buildings of England: Worcestershire, (2007)
Other
Pastscape Monument No:- 328414