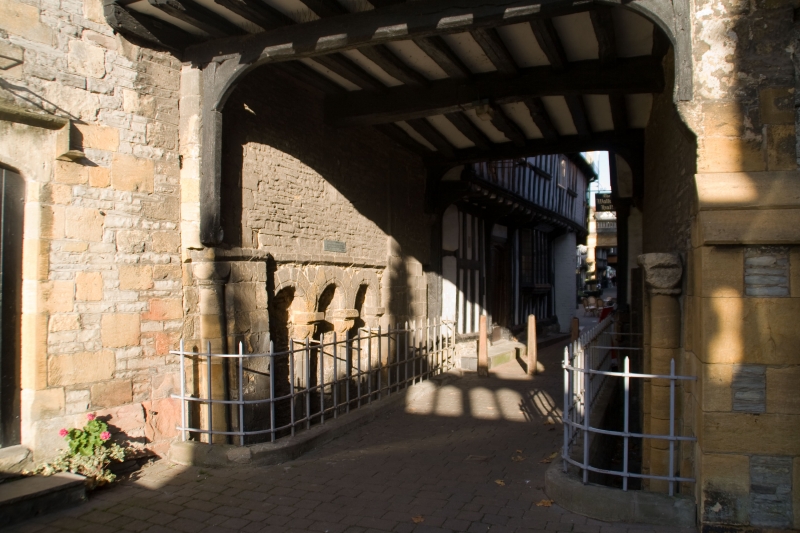 Abbot Reginald’s Gateway and The Old Vicarage, 22m north-west of the church of All Saints.

This monument includes a vicarage and a gateway to Evesham Abbey known as Abbot Reginald’s Gateway. They are situated on the northern side of Evesham Abbey precincts. The monument survives as a medieval gateway that was built as the pedestrian access to the abbey from the market square, with an attached 15th century timber framed house. The gateway and base of the house are constructed of sandstone with the upper storeys being timber framed with some brick. The gateway entrance on the south facing façade has a basket arch with a stepped buttress on the eastern side. Above the gateway is an overhanging timber framed gable with a moulded bressummer and close set vertical framing into which a pair of windows have been inserted. The northern facing façade has a deeply jettied timber framed gable with a two light window beneath a small single light window and an abutting red brick chimney. The interior passageway of the gateway is approximately 7m long and 3.5m wide with blank arcades on each side with thin triple columns and scalloped capitals and bases. The principal southern frontage of the house is timber framed on a stone base with close set framing and a central door flanked by two sash windows. The upper floor is overhanging by approximately 0.5m and is supported by a moulded bressummer. A sash window is positioned above the door between a four light oriel window and a second sash window. The roof is double pitched with a central chimney and a second chimney at the gable crossing. From its foundation in 701, Evesham Abbey alternated between monastic and collegiate foundation, finally becoming a Benedictine Abbey in 989 that lasted until its dissolution in 1539. The gateway is said to have been constructed by Abbot Reginald between 1130 and 1140.

Early monasteries were built to house communities of monks or nuns; sometimes houses were `mixed' and included both sexes. The main buildings provided facilities for worship, accommodation and subsistence. They included a series of timber halls and perhaps a stone church, all located within some form of enclosure. Benedictine monasticism had its roots in the rule written about AD 530 by St Benedict of Nursia for his own abbey at Monte Cassino. Benedict had not intended to establish an order of monasteries and wider adoption of his rule came only gradually. The first real attempt to form a Benedictine order came only in 1216. The Benedictine monks, who wore dark robes, came to be known as `black monks'. These dark robes distinguished them from Cistercian monks who became known as `white monks' on account of their light coloured robes. Over 150 Benedictine monasteries were founded in England. As members of a highly successful order many Benedictine houses became extremely wealthy and influential. Their wealth can frequently be seen in the scale and flamboyance of their buildings. Benedictine monasteries made a major contribution to many facets of medieval life and all examples exhibiting significant surviving archaeological remains are worthy of protection. Despite the construction of a road surface with iron railings, Abbot Reginald’s Gateway and The Old Vicarage survive comparatively well and form an integral part of a nationally important abbey. Elements of the original structure will remain concealed behind the later building and will provide important information on its construction.

Books and journals
Pevsner, N, Brooks, A, The Buildings of England: Worcestershire, (2007)
Other
Pastscape Monument No:- 328414